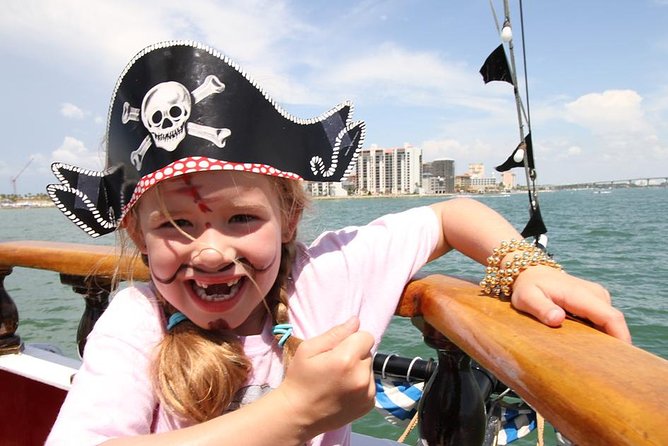 Leave Orlando behind and spend the day having fun in the sun at Clearwater Beach! Set sail on Captain Memo's pirate cruise aboard the Pirates Ransom and enjoy your free time swimming in the sparkling waters or strolling the streets of Clearwater. Round-trip transportation from select Orlando locations plus drinks and lunch voucher are included.

After an approximate 1.5-hour bus ride from Orlando, arrive in Clearwater to enjoy the beach or some sightseeing. Fritter a few hours away while basking under the sun before lunch, using your meal voucher at a nearby street caf.

Then, hop aboard Captain Memo's pirate ship and set sail for a two-hour cruise in the afternoon. Go back in time and become a seafaring buccaneer with Captain Memos fabulous crew an adventure you wont forget!

Enjoy the sounds of reggae and steel band music playing throughout the rigging of the 70-foot (21-meter) Pirate's Ransom. As you sail through open waters in the Gulf of Mexico, keep an eye out for bottlenose dolphins playing in the waves.

While on board, belly up to the bar with unlimited soft drinks, beer or wine. A full bar is available for those who like to indulge in a bit more. Back on the Clearwater Beach, your time is yours to do as you wish go for a swim and bodyboard in the waves, or walk along an endless stretch of soft sand.

If you wish, browse the souvenir shops or just stay on the beach, where you can rent watersports equipment or a beach umbrella and lounge chair. Youll have about seven to eight hours total in Clearwater, depending on traffic from Orlando.

Pickup and drop-off from centralized pick up locations in Orlando

Choice of a soft drink, beer, wine, or champagne while on the ship

Unlimited soft drink, beer or wine on the boat