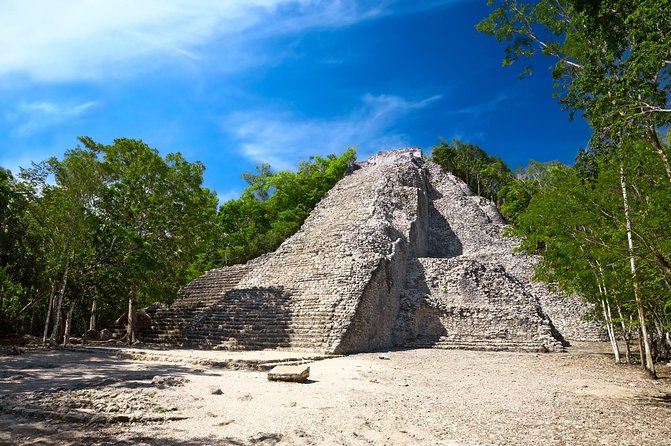 This 12-hour guided tour takes you to the two most significant archaeological sites on the Riviera maya such as the seaside city of Tulum, where ancient ruins overlook the Pacific from a majestic cliff, and the inland capita of Coba, where you can climb the Yucatan's tallest pyramid and see the ancient roadway system used by the Maya to connect their cities. Enjoy lunch, swimming in a crystal-blue cave pool, and a final stop at Playa Paraiso, Tulum's white-sand beach, before returning to your hotel.

Cob, considered one of the most important cities in Mesoamerican history. During its peak between 500 and 900 A.D., Cob was home for about 50,000 inhabitants, and also the central terminus where the Mayan system of roadways interconnected. These raised stone paths, called saucebox connect the buildings of Cob and also connect it to other Mayan cities. The longest one runs 62 miles (100 kilometers) and reaches the city of Yaxuna.
Cobas main pyramid, Nohoch Mul, is the tallest in the Yucatan at 137 feet (42 meters tall). Walk around or ride to the pyramid, then climb to the top for see panoramic views of the surrounding jungle.

Once youve taken lunch, well move on to the Hilarios Cave. Enter the cenote through a spiral staircase, emerging into a cave full of countless stalactites and crystalline water. A cool, refreshing dip in the mineral-rich water is the perfect afternoon pick-me-up.

After an early morning pickup from your hotel, well drive you to Tulum, an ancient Mayan city on a cliff overlooking the ocean. As your guide walks you through this 10th century city, youll admire its archaeological wonders such as Temple of Frescoes, the Temple of the God of Wind, and El Castillo.
Tulums uniqueness lies in its combination of historic ruins set against the backdrop of the crystal-blue Caribbean.

The final stop before returning to Playa del carmen will Be playa Paraso, Tulums white sand beach, where the Mayan Riviera stretches 75 miles (120 kilometers) to the north and the Sian Kaan Biosphere Reserve protects the areas prolific aquatic life to the south.