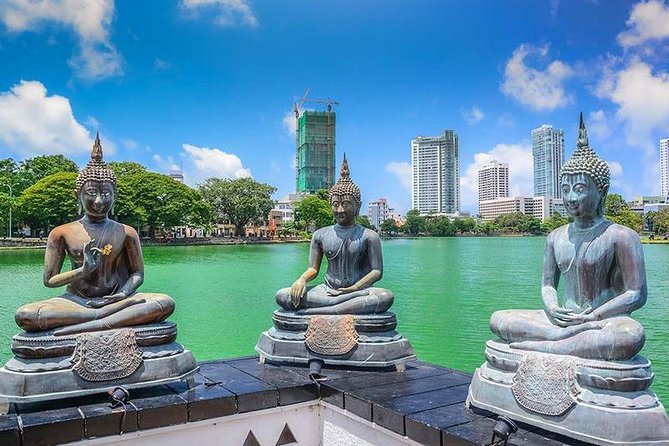 Colombo, the capital of Sri Lanka, has a long history as a port on ancient east-west trade routes, ruled successively by the Portuguese, Dutch and British. That heritage is reflected in its architecture, mixing colonial buildings with high-rises and shopping malls. The imposing Colombo National Museum, dedicated to Sri Lankan history, borders sprawling Viharamahadevi Park and its giant Buddha.

Itinerary
This is a typical itinerary for this product
Stop At: Gangaramaya (Vihara) Buddhist Temple, 61 Sri Jinaratana Road, Colombo Sri Lanka
Gangaramaya Temple is one of the most important temples in Colombo, Sri Lanka, being a mix of modern architecture and cultural essence. Located on the Beira Lake, it was completed in the late 19th century.
Duration: 1 hour
Stop At: Bandaranayake Memorial International Conference Hall, Bauddhaloka Mawatha, Colombo 00700, Sri Lanka
The Bandaranaike Memorial International Conference Hall, is a convention center located in Colombo, Sri Lanka. Built between 1970 and 1973, the convention centre was a gift from the People's Republic of China in memory of Solomon Ridgeway Dias Bandaranaike, Prime Minister.
Duration: 30 minutes
Stop At: Jami Ul-Alfar Mosque, Second Cross Street, Colombo 01100 Sri Lanka
Sri Lankas Red Mosque, or Jami Ul-Alfar Masjid, is one of the architectural wonders of the world. Situated in the bustling Pettah district, one of the oldest parts of the city of Colombo, its tall minarets are seen from almost every street, towering over the hustle and bustle of the busy neighborhood streets.
Duration: 1 hour