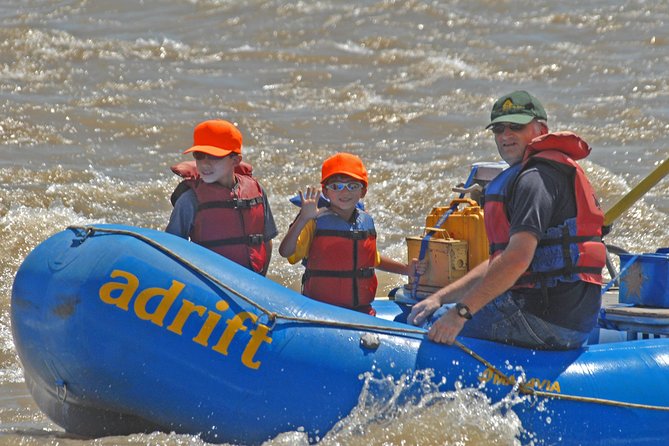 The Fisher Towers section of the Colorado River is heavy on scenery, with some fun rapids, depending on the water level and time of year. This is an area where many motion pictures and commercials have been filmed over the years. John Wayne and John Ford filmed a lot of old westerns in this area. Recently filmed in this area was The Lone Ranger with Johnny Depp and Armie Hammer in 2013. More recently, HBO's Westworld, season 1, which premiered in 2016.

From the meeting point, you will be transported up Hwy 128 (Top 10 most scenic highways in America) to Hittle Bottom, approximately 25 miles. This will take 30-45 minutes, depending on traffic and other circumstances.

Once at Hittle Bottom, the river guides will take a few minutes to get the boats and gear off the trailer and ready for the river. When everything is ready your guide will go over some river safety instructions, once everything has been covered you will board the raft. This is a calm water trip, with small rapids, class 1 and 2. Depending on water levels there is the chance for a class 3 rapid on this section. Unless you have requested a paddle boat, your guide will be doing all the rowing, so you get to sit back, relax, and enjoy the scenery.

As you make your way down the river to Take-Out Beach, and your departure point for the Full Day tour, your guide will provide you with archeology, geology, and river history. Your guide will also point out various land marks and answer any questions you may have on your journey. You will make a half-way point stop to most likely have some folks disembark and have some new folks join you for the afternoon portion of the river.

Somewhere between Rocky Rapid and the take-out point, your guides will pull over on a nice beach and set up lunch for everyone to enjoy. This stop will last around an hour and then everyone will load back up to continue down the river. Once the raft reaches the take out point at Take-Out Beach, you will disembark from the raft. The guides will then need to load the boats and equipment back up on the trailer, then you will be able to load back up on our shuttle vehicle, and we will bring you back to our office in Moab, concluding your adventure. The drive back from Take-Out Beach could take 30 or more minutes.

Paddle boats (where everyone paddles) are an option upon request (48-hour advance notice required).