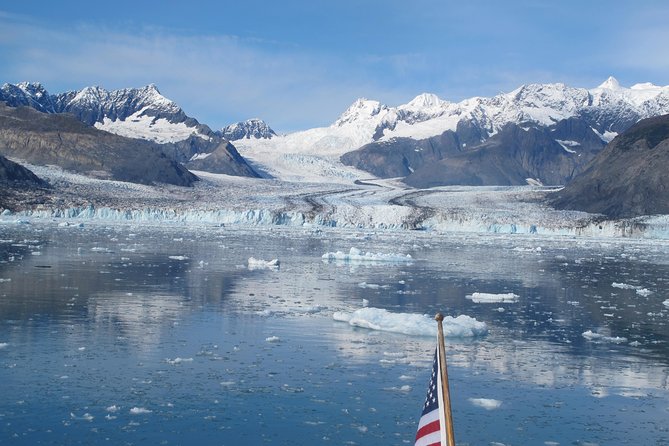 This 6-hour tour explores the fjords and passageways of the Prince William Sound in route to South-central Alaska's largest tidewater glacier Columbia Glacier. Your all-Alaskan captain and crew will share with you the history of the Sound and point out the marine wildlife and bird life in the area such as sea otters, seals, sea lions, whales, porpoises, eagles, puffins and more!

Columbia Glacier is the headline destination of this tour, however there are many other attractions along the way that your local captain and crew will share with you such as; a water based tour of the Trans Alaska Pipeline Terminal, a chance to witness commercial salmon fishing operations, and cascading waterfalls along the shoreline. A visit to Columbia Bay is one of geologic significance. Columbia Glacier, the largest tidewater glacier in southcentral Alaska is in the middle of a historic retreat into the Chugach Mountains. Each trip into this area is unique and our approach to Columbia is determined by the ice conditions we find. In addition to the amazing ice in Columbia Bay you will see wildlife along the way that calls the Sound home. Your guides will be on the lookout for seals, sea lions, sea otters, eagles, puffins, porpoise, whales and more!

Food and drinks: A cash based snack bar with snacks and soda is on board.

We do provide a vegetarian option, however are not able to meet all special dietary needs. If you have specific restrictions or needs please feel free to bring your own meals/snacks.

This tour/activity will have a maximum of 149 travelers