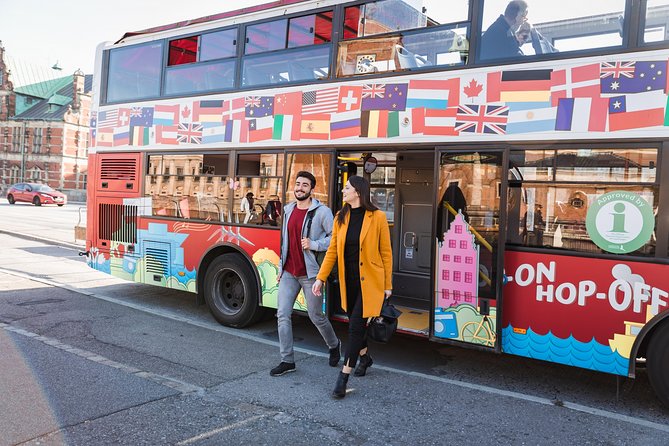 Discover the beautiful city of Copenhagen with this Open Air Double-Decker bus! Hop on and off as much as you like at any of the conveniently located stops around the city!

Explore Copenhagen's must-see attractions and activities at your own pace! Plan your own itinerary and getting the most out of your hop-on, hop-off experience.

The tour is entertaining and informative with digitally recorded commentaries in 10 languages ideal for travellers from all over the world! Hop-on and off as much as you like at any of the conveniently located stops around the city!

The tour covers some of the most popular attractions in Copenhagen such as Amalienborg, Little Mermaid, Nyhavn and Strget.

In Copenhagen, we offer 3 exciting tour lines to explore the city (ALL included in your ticket)

Here in Copenhagen you receive much more than just your ticket. We have some special offers included in your ticket.

20% off at Copenhagen Souvenir and Design (3 locations on Strget, STOP 8)

20% off a film at the Planetarium, Denmarks largest dome theatre (located at STOP 24)

20 % off your entrance at any of the following attractions: Ripleys Believe it or Not (STOP 23), Guinness Book of World Records (STOP 8), The Mystic Exploratorie (STOP 8), and H.C. Andersen Fairytale House (STOP 23)

Just show your ticket and receive your discount!

Children must be accompanied by an adult and travel for free up to and incl. 14 years

Boat tour- when your purchase the bus and boat combo, you must have the voucher exchanged on the bus at any of the stops before taking the boat tour. The boat tour ticket is for adults only. Children 3-15 will need a boat ticket, which is only available at the boat stop. The boat departs from stop 7 on the Mermaid tour (red line).