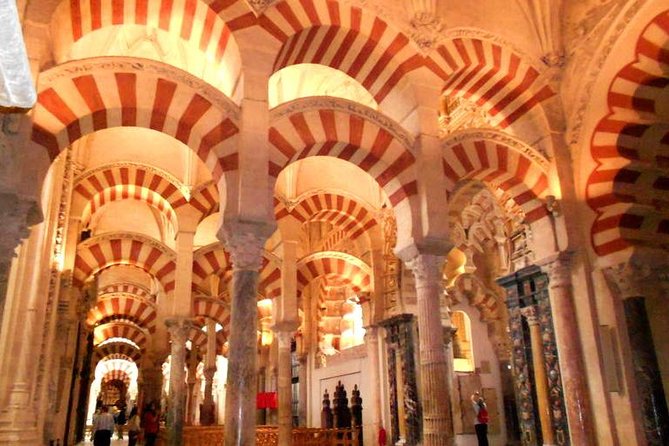 With whitewashed courtyards, colorful cobblestone alleys, historic monuments and a fascinating melting pot of Muslim, Christian and Jewish culture, Cordoba is bound to enchant. On this easy day trip from Seville, let an expert guide show you the highlights of this beautiful Andalusian city, crowned by the UNESCO World Heritagelisted city center (the second-largest old town in Europe). Stand in awe of the Mezquita and the Alczar, visit one Spains few existing synagogues, explore the medieval streets of the Jewish quarter and take a snapshot of iconic Calleja de las Flores.

Board an air-conditioned coach outside your Seville hotel in the morning for your day trip to Cordoba, located about 1.5 hours away. The capital of the Cordoba province, this intriguing Andalusian city is a captivating mix of Christian, Muslim and Jewish history, culture and architecture, noticeable as soon as you step foot in the historic city center.

Following your guide, relish in Cordobas architectural wonders and compact cobblestone lanes lined with flowering balconies, old bodegas, boisterous bars and artisan craft shops. Delve into the citys history, starting in the 10th century, when Cordoba was the worlds most populous city or so experts think. In the centuries that ensued, the predominately Muslim society became the intellectual center of Europe, noted for its tolerance toward its Christian and Jewish minorities. Today Cordoba is a UNESCO World Heritage site, and its pulsing epicenter remains the second-largest old town in Europe.

Visit the Alczar de los Reyes Cristianos, a medieval palace-fortress of the Christian kings filled with beautiful gardens, fountains and striking architecture. Then enter Cordobas most important monument, the Mezquita (aka the Mosque-Cathedral of Cordoba), a symbol of the many religious changes the city has undergone over the centuries. Originally a Catholic church, it was converted into an Islamic mosque in the Middle Ages, then back into a church after the Reconquista. With its otherworldly architecture, the Mezquita is considered one of the most accomplished Moorish monuments in the world. Notice the mix of stately Roman columns, Baroque and Renaissance frescoes and Moorish tiles and arches as you stroll the interior.

Next, head over to the old Jewish quarter (Juderia), whose streets stretch out like capillaries and emerge onto tucked-away courtyards buzzing with locals enjoying post-siesta tapas. Listen as your guide points out the distinctly Moorish flair to these medieval alleys, reminiscent of the Jews' prosperity under the Caliphate of Cordoba. Here you'll visit the Cordoba Synagogue, one of the few synagogues existing today in Spain, built in 1315 in Mudjar style.

Before leaving Cordoba, walk down the tiny Calleja de las Flores alleyway, one of the most popular streets in the city. Look back to see the Mezquita's tower peaking between the corridor Cordobas most iconic sight. Then hop back in the coach for the 1.5-hour drive back to Seville.