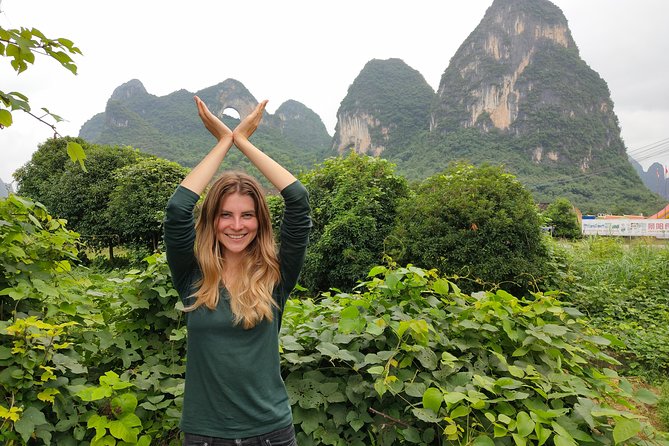 Itinerary
This is a typical itinerary for this product
Pass By: Yulong River, Yangshuo, Yangshuo County China
The Yulong River is a major tributary of the Li River. Rafting there allows another excellent vantage point from which to experience the Guilin limestone mountains at their best. Local people use rafts as daily transportation up and down the river between house, markets, and rice paddies.
Stop At: Moon Hill, 8 km from Yangshuo, Yangshuo County China
Moon Hill is somewhat the symbol of Yangshuo, from a distance its actually just a mountain with a hole in it shaped like a moon but its the nice hike up with the rewarding view from the summit that justifies it status as a must visit spot in Yangshuo. The hill is covered by dense trees and bamboo giving the hill a rich lush feeling which during the sunny summer days, offers some welcome shade from the sun. After you have conquered the more than 800 stairs leading to the moon shaped cave, where climbers can be seen showing off their skills on the overhanging cliff, you are just a few steps away from the main platform near the top that offers great views over the landscape and Yangshuo town.
Duration: 1 hour
Stop At: Li River, East of Guangxi Zhuang China
Located in the northeast of Guangxi Zhuang Autonomous Region, the Li River is a jewel among natural landscapes in China. At 437 kilometers long, it is the worlds largest and prettiest karst landscape destination, being credited as the essence and soul of Guilin scenery. The most enjoyable part is the 83-kilometer-long voyage on boat between Guilin and Yangshuo, passing through the extraordinary sceneries frequently compared with traditional Chinese landscape painting. The most notable is the reflection of mountains, solid rocks being endowed by water with dynamism, spirituality and life. This river has attracted men of literature and poetry for as long as it has flowed.
Duration: 1 hour
Stop At: Impression Sanjie Liu, No 1, Tianyuan Rd Lijiang Shanshui Theater, Yangshuo County 541999 China
The 'Impression of Liu Sanjie' is an outdoor night show beside the Li River in Yangshuo County which is 60km from Guilin.
Different from other shows in an enclosed space, the show - Impression of Liu Sanjie stages in the actual Li River which stretches 2 km (1.25 miles). The mist, moonlight, together with 12 Karsts peaks and their inverted reflections in the river all creates a spectacular natural backdrop. The large-scaled lights system, special smoke-effect system and the overwhelming sound system in harmony with the natural landscape presents a visual feast to audients.
The show lasts approximately 70 minutes and consists of 7 episodes: the Prelude, Red Impression, Green Impression, Golden Impression, Blue Impression, Silvery Impression and the Epilogue. Each episode displays different images and sceneries with the ever-changing natural background and lighting.
There are 600 actor and actress involved and most of them are fishermen from the villages along the river. Zhang Yimou, the chief director of the performance, who is also the chief director of the opening ceremony of Beijing Olympic 2008, creatively combines the classical Liu Sanjies folk songs and ethnic group culture together and presents a large-scale realistic performance in harmony with landscape.
Duration: 1 hour 10 minutes