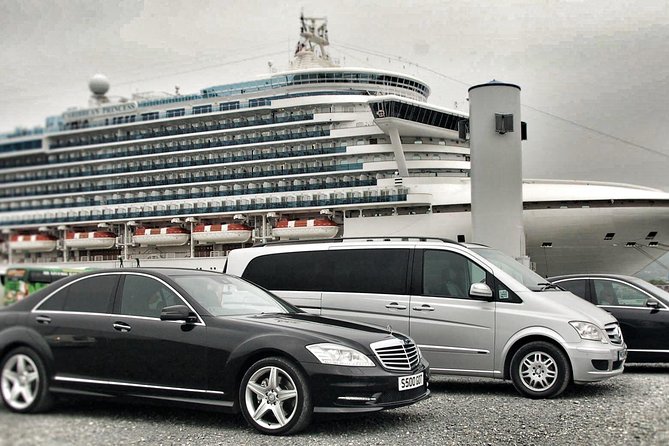 One of the most breath taking drives in the world as you twist and turn along the Antrim Coast road,visiting castles and beautiful beaches along the way Game of thrones locations.
Only 90 minutes outside of Belfast the Antrim Coast opens up to a whole new world. Driving along the waters edge youll be taken back how the scenery changes so dramatically as you turn every corner.
Simply relaxing in comfort of your luxury MPV occasionaly stopping of at your leisure and having refreshments , your choosing your guaranteed a great day out. Not forgetting of course that your guide is hand to ensure you make best use of your time. Being picked up from your cruise ship youll need to set aside for 2 hours journey time for each journey so we recommend and early start. This is also a full days tour which we believe offers great value for money and with the possibility to carry up to 7 passengers per MPV - youll be amazed a what enjoyment youll get for your money. * .

Tour duration 7 hours and will take over 1 hour to first location. But your guide will tell you about our emerald green beautiful countryside and local myths and legends.You will also visit Game of thrones locations that have been renamed our favourite attractions for the show.
.Example KINGS ROAD (Game of thrones) but really is the Dark hedges.
Dark Hedges (Kings Road)This is a spectacular photo opportunity of beech Trees planted over 200 years ago and the famous Game of thrones location where Ayra Stark flees Kings Landing.
Bushmills Distillery

Bushmills Distillery founded 1608 photo opportunity and a chance to buy a bottle of this famous Whiskey and taste a free nip of its 12 malt only bought at Bushmills.

Please the distillery doesnt open until 12 oclock on Sundays. Tour of distillery can be offered for 12 per person but will take up a lot of your tour duration time only for non cruise ship passengers as waiting time can take up to 45 mins and tour last 1 hour
Dunluce castle (House of Greyjoy in Game of Thrones)

Dunluce castle built in the late middle ages and rebuilt in the 17th century invaded by the English & Scottish.

Pyke Castle has been used in several seasons of the HBO drama Game of Thrones.

Please note that you have the opportunity to enter the visitor centre at 9 per person but you also have the option of using the public pathwaywhich istotally free.

White Park Bay A Beautiful scenic beach at the very tip of Ireland and the closest country from here would be Iceland which is 800 miles away.
Ballintoy harbour (Lordsport / Stormlands in Game of Thrones)Ballingtoy Harbour was built to export Lime around the world. The harbour was used as Lordsport for Theo Greyjoy is baptised and also features in season 6 of the epic Game of Thrones Drama.
Carrick-a-rede Rope Bridge (Renly Baratheons Camp)

Carrick-a-rede rope bridge was used by fishermen for over 100 years to catch salmon and gain access to the island. Not for the faint hearted as steep steps all the way down the 1 km walk. The bridge is 20 metres long and 98 ft high and costs 5.50 per person to cross.

Please note on a cruises ship day the wait can take over 1 hour and 30 mins. We recommend a vantage point to take a beautiful photograph of the bridge.