Full-day Da Nang Discovery From Hoi An - With Reviews & Ratings 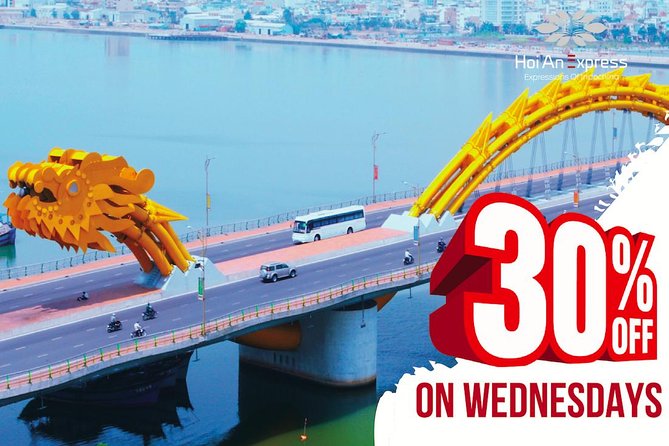 A comprehensive tour that explores the highlights of Vietnams third biggest city, Da Nang; a beautifully located city surrounded by river, sea and mountain that perfectly blends modernist architecture with a rich bounty of cultural treasures. Voted the No.1 Destination on the Rise by Trip Advisor

The beautiful city of Da Nang offers some wonderful activities for us to embark on. From the hotel, we will visit Ho Chi Minh and Fifth Military Zone Museum. It features a replica of President Hos home in Ha Noi with a fishpond, a house on stilts, its garden and other relics. Besides, this museum also has a lot of large war equipment including aircraft and tanks that were captured in the French and American wars by the soldiers of the Fifth Military Division. Da Nang Museum with rich local history and culture, is the next stop.

We will continue to the Cham Sculpture Museum. The Cham museum in Da Nang is dedicated to this period and the Champa existence, which began predominantly in the coastal areas of Vietnam. The museum displays almost 300 terracotta and stone works of art ranging from the seventh to the fifteenth century.

Continue to Thuan Phuoc Bridge at Tien Sa Port, another wonderful bridge in Da Nang City. The next stop is Dragon Bridge, a very unique and modern bridge that crosses the Han River from the Bach Dang traffic circle.

After lunch, we will visit Marble Mountain (Vietnamese: Ngu Hanh Son; literally "five elements mountains") where we will discover the stunning natural caves of the mountain and enjoy the beautiful view from the top. We will also visit mysterious pagodas and the sculpturing village. We will continue to Son Tra Peninsula visit the spectacular Son Tra Quan Yin, or Goddess of Mercy statue. See the sheer size and beauty of the Lady Buddha up close then learn the legend behind this patron saint of seamen.

Transfer and transportation as per itinerary

One way elevator at Marble Mountain