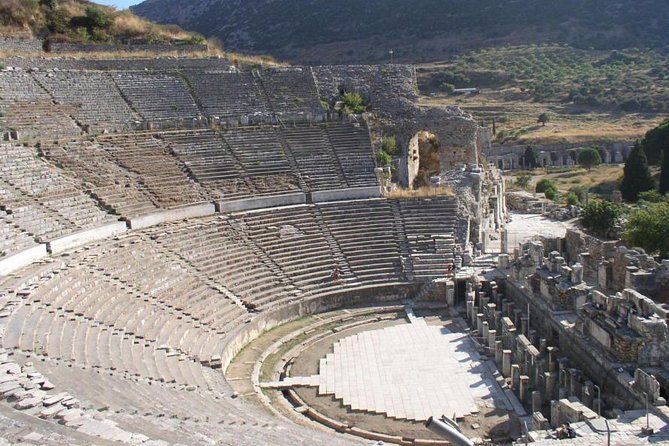 Spend a whirlwind, magical day on a private tour of one of the worlds oldest sites with this full-day trip to Ephesus from Istanbul. Fly to Izmir and meet your private guide, who will whisk you off to the ancient land of Ephesus. Tour the Ancient City, Temple of Artemis, Temple of Hadrian, and Library of Celsus. Then tread in the footsteps of the Virgin Mary at her former home. Enjoy lunch in a local crafts center and learn about the regions traditional weaving techniques, and see a display of locally made rugs. This private tour can be customized to suit your interests and offers personalized attention from your guide.

Already a great trading and religious center during the time of the Greeks, Ephesus grew in importance after the Romans assumed control, becoming a provincial capital with traders and Christian pilgrims coming from all parts of the known world. One of the major sites at Ephesus is the beautiful Celsus Library; it was built in the beginning of the 2nd century A.D. by Gaius Julius Aquila to be a memorial to his father Gaius Julius Celsus Polemanus, the proconsul of Province of Asia. The columns at the sides of the faade are shorter than those at the center, giving the illusion of the building being greater in size. Between 1973 and 1977, an earthquake proof reconstruction of the faade was completed. The Grand Theater is one of the most impressive buildings in Ephesus. Built in the 6th century B.C. it was later expanded in the 1st century A.D. by the Romans to hold a capacity of 24,000 people. The theater was the place where St. Paul preached. Opposite is the Temple of Hadrian built in the 2nd century A.D. and renovated in the 4th century in the name of Emperor Hadrian.

Take a break for lunch in the garden of a local handicrafts center, where you can see some of the traditional carpet weaving techniques used and view splendid displays of locally-made carpets. After lunch, head to the House of Virgin Mary, located in the Aladag Mountains 5 miles from Ephesus. At the third Ecumenical Council of 431 in Ephesus, it was claimed that Mary came to Ephesus with St. John in 37 A.D. and lived there until her death in 48 A.D. After the discovery of the house, the Archbishop of Izmir declared it a place of pilgrimage in 1892. On July 26, 1967, Pope Paul VI visited this place and prayed here. After exploring the site, head back to the Izmir Airport for a 7pm flight to Istanbul. Arrive back around approximately 8pm.

Entry/Admission - The Temple of Artemis

Passport name, number, expiration date, and country are required at time of booking for all participants