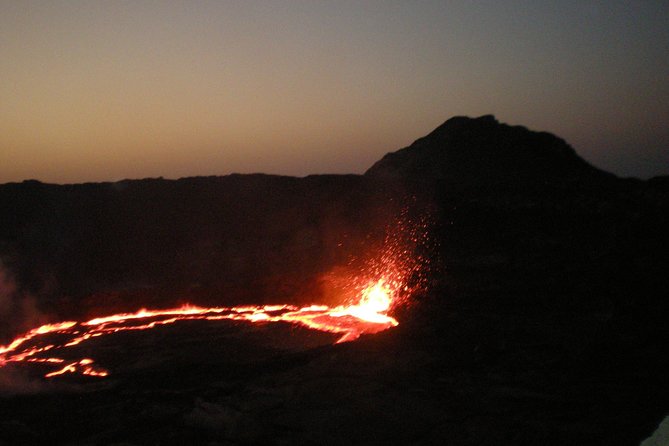 The Danakil Depression is a contender for the hottest place on Earth, at least if you measurethe average year-round temperature(reportedly 34.4C) rather than focusing onisolated bursts of extreme heat.Worse, it only receives 100 to 200mm of rainfall per year and it is also one of the lowest places on the planet, at 410ft (125m) below sea level.Combined, these factors make it one of the most inhospitable environments in the world.

We drive from Mekele to - Dodom. We start early drive to Dodom (at the base of Erta Ale). Leave after an early breakfast, possible at 07:30. This is may be one of the worst roads in the world. The 70 km distance may take about 5 hrs passing through changing landscape of solidified lava, rock, sand and occasional palm lined oasis. After you pass several small hamlets scattered here and there in this desert land, Dodom is about 9.5km from Erta Ale and it takes about 3 hrs trekking. Early dinner around 17:00 and trek up to Ertale at 20:00 hours. Camels transport all the camping materials and some food (sleeping materials like light mattresses and mat and water) to the rim of the volcano, where we spend the night watching the dramatic action of the boiling lava. Erta Ale ranks one of the most alluring and physically challenging natural attractions anywhere in Ethiopia. It is a shield volcano with a base diameter of 30 km and 1km square caldera at its summit. Erta Ale contains the worlds only permanent lava lake. Overnight on the top of the mountain. Erta Ale is 613 meters, with a lava lake, one of only five in the world, at the summit. It is notable for being the longest existing lava lake, present since the early years of the twentieth century. O/n camping on the mountain

Day 2: Dodem Hammedele,
Descend from Erta Ale around 9 am Dodom - Hamd Ela. Leave back to Dodom after an early breakfast, if possible at 07:00. You will reach latest at 10:30 am at the camp, time to relax. After drive to reach Hamad Ela, better village with a total population about 500 people. O/n Hamedela( camping)

Morning tour Drive to Ragad (Asebo), the place where the localities are mining salt. Look the activity of breaking the salt from the ground, cutting in to rectangular pieces and loading on camels. You drive ahead to Dallol and visit the difference landscape formed by volcanic activity, Dallol + Lake Assal + camel caravans. Excursion to Dallol (116 meter below sea level, one of the lowest places in the world) colorful salts mining, visit Lake Assal, follow up camel caravans and walk with the Afar people. Drive back to Hamedela and proceed to Mekele.Day 04: Addis - Departure
This day you will be transferred to the airport for your flight to Addis. In the evening attend a folkloric dinner where you will have a chance to taste several national dishes and watch dances of the various ethnic groups of Ethiopia. The traditional coffee ceremony will also be served.  Later you will be transferred to the airport for your departure.