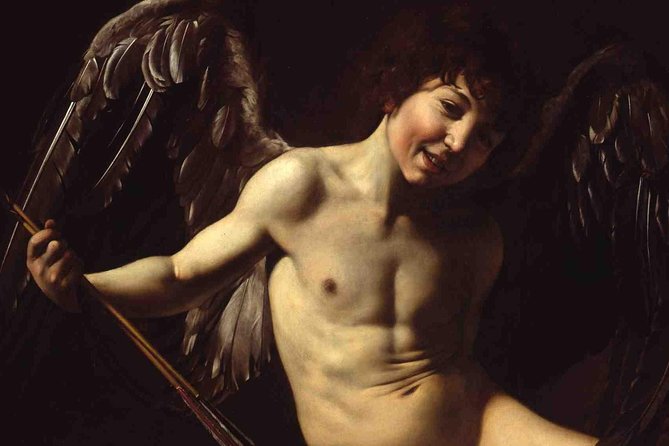 This is a fully private and exclusive walking tour which covers brawling genius Caravaggio's life and works in Rome.Were the rays of light which illuminated his finest creations a fair reflection of his extreme lifestyle?Time spent with your expert Art Historian guide is approximately 2 hours and you will catch the very best works of Caravaggio in the beating heart of historic Rome!

From stock painter for Roman Mannerist Guiseppe Cesari at the turn of the 17th century to his first commission in the Church of San luigi dei francesi, we cover the life, works, and escapades of Caravaggio when in Rome. Understand his considerable influence as a Baroque artist and the concept of Tenebrism.

Michelangelo Merisi da Caravaggio was tutored by Simone Peterzano in Milan, who himself was one of Titian's protgs in Venice. Caravaggio's style of portraying common people in every day situations with "dramatic chiaroscuro", where a shaft of divine light illuminates the main subject from an unclear origin to leave the rest of the scene in obscurity, sets his work apart from his peers.

Between 1596-1604, Caravaggio was perhaps the most famous painter in Rome. Prolific, too, in light of the fact that he was handed many commissions. Praised by Cardinal and benefactor Francesco Maria Del Monte, whose residence was Palazzo Madama (the seat of the Italian Senate today), Caravaggio's life in Counter-Reformation Rome was centred around Piazza San Luigi dei Francesi until he moved into the palace to work. His newest creations were often inaugurated in churches, some of which have not been moved since their unveiling on hallowed ground over 400 years ago. The way in which Caravaggio portrayed gamblers, peasants, prostitutes, and the darker side of street life - in which he had his own fateful part to play - provoked outrage, so much so that he was forgotten in death until the turn of the 19th century. It is believed that Caravaggio prowled the streets around Piazza navona dressed head to toe in black with a black dog by his side. Despite his reputation as a hell-raising rabble rouser, Del Monte's contacts and influence thrust Caravaggio into the spotlight. The powerful Cardinal Scipione Borghese, patron of Bernini, became an avid collector of his work.

This tour coversCaravaggio's finest works, the places where he lived and worked, where he drank, and where it is believed he killed. We begin with the Church of San Luigi dei Francesi (serialization of the life of St. Matthew adorning the Contarelli chapel, 1600) between the Pantheonand Piazza Navona.Doria pamphili gallery is next wherein hangs "Penitent Magdalene" (1594) and "Rest on the Flight into Egypt" (1597). We conclude inside the Capitoline museums' Pinacoteca to see "St. John the Baptist" (1602). Caravaggio was a great influence on Peter Paul Rubens who was in Rome at the same time, and Rembrandt, who practiced a particularly theatrical form of "chiaroscuro".

Cost of entrance admission tickets not included (c. $40 p/p) but they're inexpensive and we're not in the business of marking up museum tickets when they are part of a tour.

A dress code is required to enter places of worship and selected museums. No shorts or sleeveless tops allowed. Knees and shoulders MUST be covered for both men and women. You may risk refused entry if you fail to comply with these dress requirements.