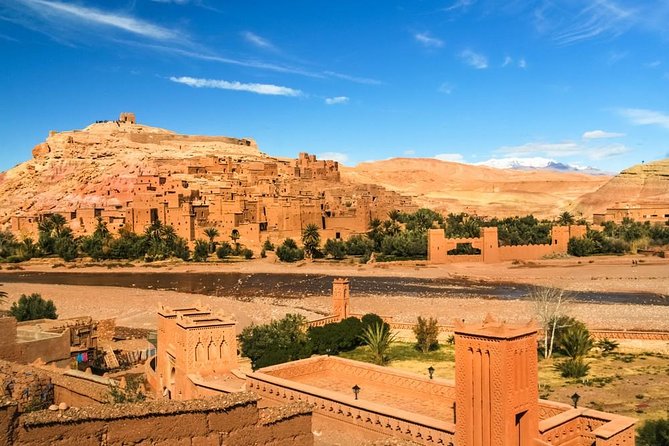 Explore the culture and history of Ouarzazate on this full-day tour of the Sahara Desert as you admire the Atlas mountains, Berber villages, Tizi n'Tichka mountain pass and more.

Join this shared Ouarzazate tour from Marrakech and journey through the eye-catching villages and the High Atlas Mountains. Cross Tizi-N-Tichka Pass (2,260m) where you revel in amazing views of the hills and summits of the High Atlas. Next, you will have a stop in the Kasbah of Ait Ben Haddou to explore its historical treasures and outskirts. Following lunch at traditional restaurant. After leaving the sublime Kasbah, you will take way to the charming city of Ouarzazate, which is known as Hollywood of Africa, due to its fascinating nature and biggest studio. This attracts many international companies to make its movies here. Ouarzazate is a film-making location where the famous movies were filmed such as Lawrence of Arabia (1962), Gladiator (2000), Kingdom of Heaven (2005)

Once in Ouarzazate, discover Cinema Museum and then visit Taourirt Kasbah, which comprises 300 rooms and a glorious maze of alleyways; you can feel lost within this enormous structure. At the end of tour, travel back to Marrakech and drop off at your accommodation.

Hotel pick-up and drop off

Guide is not included

This tour/activity will have a maximum of 17 travelers