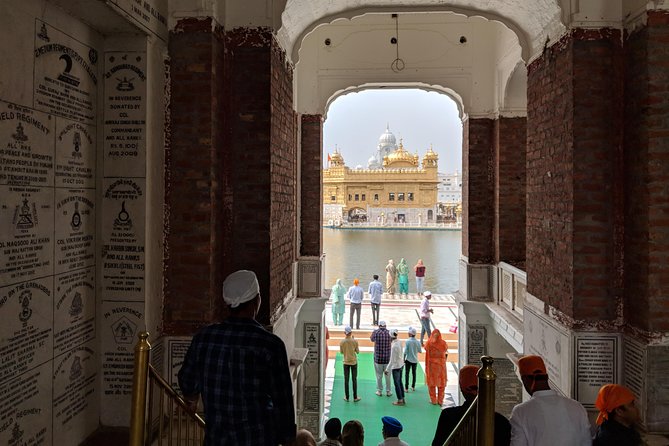 Visit to the most sacred place of Sikhs in the world called The golden temple. Enjoy a visit to the Kitchen Section of temple. Visit to the India Pakistan Wagah border to witness the Beating Ceremony where policemen marching to the beats of the drum.

Start your journey with a hotel picks up at 9:30 AM to explore the cultural streets of heritage city that is older than 400 years.

Visit The golden temple, one of the most sacred places for Sikhs in the world. Let your guide explain you about the temple and later on visit the Temples museum to learn about the history and its establishment in India.

Next, walk to the Langar (Mass dinner) hall to witness the devotion and compassion of people working over there. Have some food at the langar to enjoy the real experience. Visit the kitchen section to learn how the food is prepared over there. Also, learn how to roll round chapattis.

Later, drive to Jallianwala bagh, a memorial for the massacre by General Dyer that killed more than 1000 people back in 1919.

Later on, proceed for the lunch in a local restaurant of Amritsar. Now drive to the Wagah border at around 3:00 PM and prepare to witness the Flag down ceremony performed at the Border between Indian and Pakistan. Also known as Beating ceremony that starts at 5:00 PM it showcases border policemen marching to the beats of the drum.

Post the end of the ceremony, get dropped off at the hotel.

Shoes must be removed at the places of worship

Shoulders and knees to be covered at the places of worship