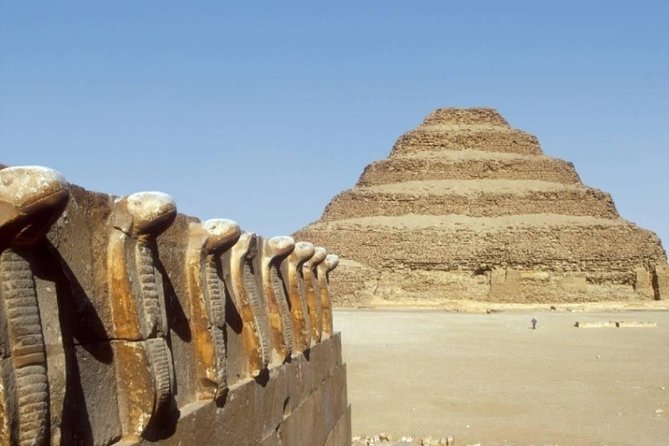 startsAt 8:00 am Pickup from your hotel inCairo/Giza to Start your full day tour visitingGiza Pyramidswhere you Visit the Great Pyramids-Cheops, Chephren & Mykerinosthen VisittheValley Templewhere the Priests Mummified the dead body of King Chephren Also there you will have a close-up look atThe Sphinx- The legendary guardian that stands by the huge funeral complex with its lion body and the head of king Chephren.(2:30 hrs time Spent)

Then VisitSakkara, located only 27 km southwest away from Cairo. Visitthe Step Pyramid(Built for king Zoser), it is considered an important part of the process of the pyramid evolution, which were made from the simple mastaba to its widely known form.(2 hrs Time Spent)

Then VisitDahshur Pyramids (Bent and Red Pyramids)Dahshur area is a royal necropolis located in the desert on the West Bank of the Nile approximately 40 kilometers (25mi) south of Cairo. It is known chiefly for several Pyramids, two of which are Among the oldest, largest and best preserved in Egypt, built from 26132589 BCE.(1 hr Time Spent)

Hotel names is Required during the Booking Process