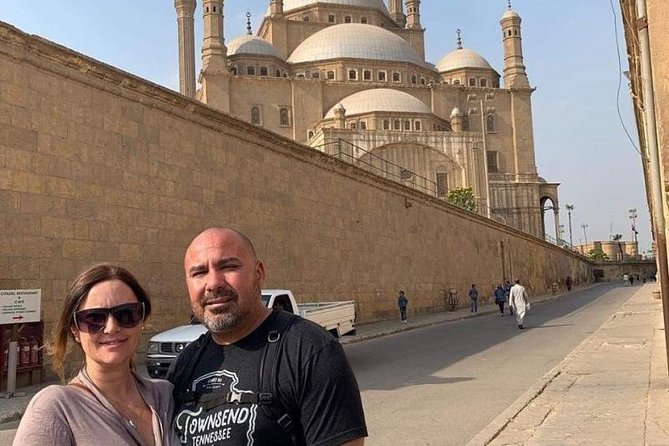 Islamic Cairo is a part of central Cairo around the old walled city and around the Citadel of Cairowhich is characterized by hundreds of mosques, tombs, madrasas, mansions, caravanserais, and fortifications dating from the Islamic era. In 1979, the United Nations Educational, Scientific and Cultural Organization (UNESCO) proclaimed Historic Cairo a World Cultural Heritage site, as "one of the world's oldest Islamic cities, with its famous mosques, madrasas, hammams and fountains" and "the new centre of the Islamic world, reaching its golden age in the 14th centur

Itinerary
This is a typical itinerary for this product
Pass By: Islamic Cairo, Midan Silah ad-Din, Cairo 11511 Egypt
8.00 a.m Our Travelino Egypt tour guide will escort you by air conditioned vehicle to visit you will be transferred to one of the most Stunning construction in Cairo The Citadel of Saladin Al Ayouby. It was built in 12th century to fortify Cairo against the Crusaders. The citadel was used as the seat of the king and his government in Egypt for many centuries and many dynasties including the Ayyubids, the Mamluks, and even some Ottomans ruled over Egypt from the Citadel and the Great Alabaster Mosque of Mohamed Ali Pasha which stands proudly on the highest point inside the courtyard of the Citadel of Saladin. Its one the landmarks in Cairo with its huge space, the beautiful decorations on its walls, and its remarkable domes and minarets
Then, Proceeding to visit 3 great architectural buildings near the Citadel. The First is Sultan Hassan Madrasa and Mosque which is one of the extraordinary wonderful monuments in the Islamic world. The architectural parts of the complex are so terrific like the cornices, the entrance, and the monumental staircase.
The Second Building is Al Refaie Mosque that lies right beside Sultan Hassan Madrasa. The Mosque was established by Khoshiar, the mother of Khedive Ismail to be the mausoleum of the royal family. It took 43 years to build this beautiful sanctuary that combines different Islamic architectural styles.
After that visiting the biggest mosque in Egypt Ahmed Ibn Tulun and watching the great view of Islamic Cairo from its minaret then going to Gayer Anderson Museum who was one the high commanders in the British Army during the British invasion to Egypt
Then moving to visit the Tent Makers Market or Khayamiya which is located on the southern side of Bab Zuweila where you will find fantastic textiles decorated with scenes and pictures depicting nature and Egypts attractions,Then moving to take a walking tour in the 1000 years old "el Moez" street which is considered as an open air museum for Terrific Islamic Buildings which are decorated with different patterns and paints, then ending our tour with going to Khan el Khalili Bazaar which is one of Cairo's main attractions .. the district of Khan el Khalili was originally a mausoleum called "el Zaafran" for the burial of Fatimid Caliphs ,after that it became a district for the Turkish community during the Ottoman period , and now it becomes a bazzar where you will find many souvenirs shops ,coffeehouses "Caf" serving Arabic coffee and offering Hookah "Shisha", and restaurants throughout the area.
Then, Ending the tour After this trip you will be transferred to your hotel

There are no health restrictions