Day Tour To Luxor From Cairo By Plane

Day Tour To Luxor From Cairo By Plane 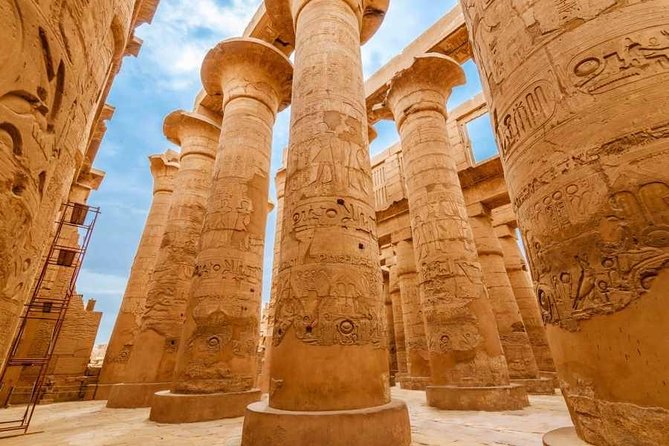 Luxor day tour 12 hours starts every day and it`s in depends on Flight availability from 3:30 am to 22:30 pm, Private tour includes all pick up & drop off from customer location in Cairo, Flight Tickets on Economy Seats, Expert tour guide, Lunch at Local restaurant, All Taxes Services, Snacks and All Transfers by Private A/C Vehicle, Tour Excludes personal items, tipping, entry visa to Egypt and any optional tours.
there is possibility of entering any of the King Tutankhamen Tomb at Valley of the Kings But this can be added in the middle of the booking process because it requires additional fees

Itinerary
This is a typical itinerary for this product
Stop At: Luxor, Luxor, Nile River Valley
is a city in Upper (southern) Egypt and the capital of Luxor Governorate. The population numbers 506,535 (2012 estimate), with an area of approximately 417 square kilometres (161 sq mi).
The modern city sprawls to the site of the Ancient Egyptian city of Waset, also known as Nut and to the Greeks as Thebes or Diospolis, Luxor has frequently been characterized as the "world's greatest open-air museum", as the ruins of the temple complexes at Karnak and Luxor stand within the modern city. Immediately opposite, across the River Nile, lie the monuments, temples and tombs of the west bank Necropolis, which includes the Valley of the Kings and Valley of the Queens.
Thousands of tourists from all around the world arrive annually to visit these monuments, contributing greatly to the economy of the modern city.
Duration: 14 hours
Stop At: Temple of Hatshepsut at Deir el Bahari, Kings Valley Rd Deir el-Bahari, Luxor 23512 Egypt
Deir el-Bahari or Dayr al-Bahri al-Dayr al-Bar "the Monastery of the North") is a complex of mortuary temples and tombs located on the west bank of the Nile, opposite the city of Luxor, Egypt. This is a part of the Theban Necropolis.
The first monument built at the site was the mortuary temple of Mentuhotep II of the Eleventh Dynasty. It was constructed during the 15th century BCE.
Duration: 3 hours
Stop At: Temple of Hatshepsut at Deir el Bahari, Kings Valley Rd Deir el-Bahari, Luxor 23512 Egypt
Hatshepsut's chancellor, the royal architect Senenmut, oversaw the construction of the temple. Although the adjacent, earlier mortuary temple of Mentuhotep II was used as a model, the two structures are nevertheless significantly different in many ways. Hatshepsut's temple employs a lengthy, colonnaded terrace that deviates from the centralised structure of Mentuhoteps model an anomaly that may be caused by the decentralized location of her burial chamber. There are three layered terraces reaching 29.5 metres (97 ft) tall. Each story is articulated by a double colonnade of square piers, with the exception of the northwest corner of the central terrace, which employs proto-Doric columns to house the chapel. These terraces are connected by long ramps which were once surrounded by gardens with foreign plants including frankincense and myrrh trees. The temple incorporates pylons, courts, hypostyle, sun court, chapel and sanctuary.
Duration: 3 hours