Tour To Ramesseum, Habu Temples, And The Valley Of The Nobles - Luxor - With Reviews & Ratings

Tour To Ramesseum, Habu Temples, And The Valley Of The Nobles - Luxor 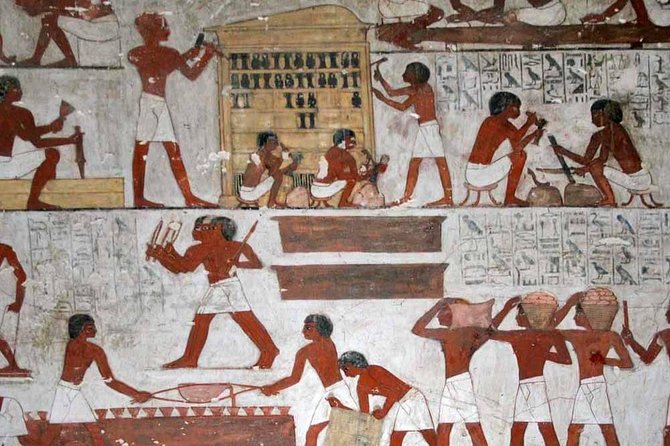 Spend five hours on a professionally guided tour through Egypt's past as you visit the Ramesseum temple, Habu temple, as well as the Valley of the Nobles. This private tour includes pickup and drop off, entry fees, water, snacks and a Egyptologist tour guide.

Your 5-hour tour begins in the early morning when your guide picks you up from your Nile cruise or Luxor area hotel. You'll first visit the Theban necropolis before setting out for Ramesseum temple, which was a memorial to King Ramses II. Here you'll find the remains of a massive, 62 ft (19m) statue, carved in the figure of Ramses II and weighing over 1,000 tons. In addition to the statue, the walls here are decorated with intricate reliefs, including scenes depicting the Battle of Kadesh, the Syrian wars, and the Festival of Amon Min.

You'll next proceed to Habu Temple, built for Ramses III, who was the last king of the New Kingdom (1550-1080 BC) to wield any substantial authority over Egypt. The temple is the best preserved of the New Kingdom memorial temples, and is decorated with military scenes and texts illustrating the victories, rituals, and festivals that took place in the time of King Ramses III. You'll also see a royal palace at the southern end of the forecourt, while the priests dwellings and administrative units lay on either side of the temple.

Continue to visit the Valley of the Nobles, where tombs of ancient Egypts nobles were scattered through the rocky hills. Located at el Qurna, on Luxor's west bank, the majority of the tombs date from the New Kingdom or the Golden Age of Thebes. Decorated with scenes of daily life and theafterlives of their owners, these tombs provide a wealth of information about not only life, but religious beliefs that were practiced in ancient Egypt. Additionally, their beauty attests to the skill and creativity of ancient Egyptian artisans.

After five hours of exploring temples with your Egyptologist guide, the tour finishes when you're transferred back to your cruise or Luxor hotel.

Entry/Admission - Valley of the Nobles