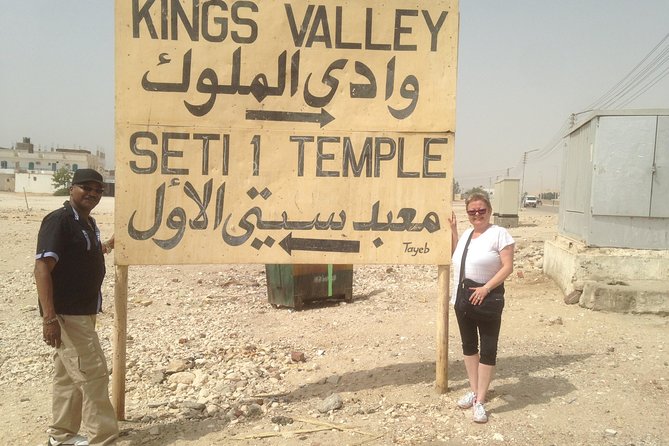 Enjoy a memorable day tour while exploring the mysteries of ancient kings and queens, such as King Tutankhamun, the most famous king in the world. This young king from the New Kingdom was around 10 years old when he ascended the throne and died when he was only 19. You will get the chance to be face to face with his royal mummy in his tomb in the Valley of the Kings. Also, visit other important royal tombs in the Valley of the Kings, such as the beautifully decorated Tomb of King Seti I which is currently open for a limited time and for limited visitors only. Your Egyptologist tour guide will be with you to take you back in time to unveil the mysteries of these famous royals.

In the morning you will be picked up from your hotel in central Luxor or harbor by an air-conditioned vehicle for a full guided trip of about 6 hours.
First you will be transported to the Necropolis of Thebes, the Valley of the Kings on the West Bank of Luxor. This ancient necropolis is a must-see for Luxor travelers. There you visit five royal tombs, including the Tomb of Ramses, the Tomb of Horemheb, the Tomb of Merenptah and the Tomb of Seti I. Seti I was a pharaoh of the nineteenth dynasty and he was the grandfather of King Merenptah and the father of Ramses the Great. In the tomb of Seti I you can see a high quality of carvings and paintings, which is why his tomb is considered one of the best decorated tombs in the Valley of the Kings. It is also the longest tomb in the Valley with its 137 meters and has very well preserved decorations, including a scene of the Ritual of the Opening of the Mouth and astrology and astronomy reliefs in the burial chamber. You also visit the Tomb of King Tut. The tomb of Tutankhamun is the only tomb in the Valley of the Kings that was discovered nearly intact in 1922. The discoverer of his tomb was Howard Carter. Tut's famous golden mask is on display at the Egyptian Museum in Cairo, but here you have the opportunity to be amazed at the royal mummy of the young king.

After visiting the tombs you will be transported to the Temple of Queen Hatshepsut (Deir el Bahari), the only woman ever to reign over Egypt as pharaoh. This queen was an ancestor of King Tutankhamun and belonged to the same dynasty.

Afterwards, you will be taken to see the Colossi of Memnon, the two largest ancient statues in Egypt which date back to the era of King Amenhotep III. He was the father of King Akhenaten and grandfather of King Tut.

After touring the sites you will be transferred back to your hotel by an air-conditioned vehicle.

This tour includes a qualified Egyptologist tour guide, transport by air-conditioned vehicle, all entrance fees for the mentioned sites, hotel pick up and drop off.