Day Trip From Istanbul To Bursa: The Ottoman Capital - With Reviews & Ratings

Day Trip From Istanbul To Bursa: The Ottoman Capital 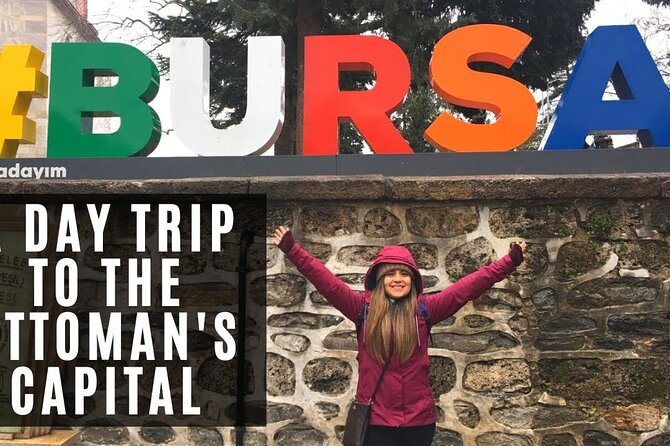 Explore the former Ottoman capital Bursa on this day trip from Istanbul. Travel by ferry via Yalova, enjoying the lovely countryside view. Enjoy lunch of famous "Kebap of Alexander The Great". Climb to Uludag, the legendary Mount Olympos, by cable car), visit to Ulucami, the Green Mosque and the Green Mausoleum, the old Silk Market in the Covered Bazaar. Late evening return to Istanbul and transfer to hotels..
PS;Our Bursa tour takes place in another city other than Istanbul. Therefore, the tour hour is long and we spend our long time in the minibus. Please make a reservation considering this issue.

Start your day with a pickup from your European-side Istanbul hotel, and travel to the port where your ferry awaits. Cruise south across the Sea of Marmara to Yalova, and then continue your journey by air-conditioned minivan. After just over two hours of traveling, arrive into Bursa, the first capital city of the Ottoman Empire.

With a your guide at your side, travel by minivan and ferry to the city and then visit some of its landmark monuments. Gaze in awe at the colorful grandeur of the Green mosque, and then learn of the city as an Ottoman-era silk powerhouse on a trip to Bursa Silk Market and the Koza Han building. After lunch, ride to the top of Mt Olympus (Snow Hill) by cable car and some impressive city views.

Ottoman Empire was one of the largest empires in the history. Bursa was its first capital. The city that is settled on the northwestern slopes of Mount Uludag is known as "Yesil Bursa" (meaning "Green Bursa") from its beautiful parks and gardens located throughout the city. This fourth largest city of Turkey is also known for its peaches, chestnuts, and silk industry.

The city is frequently cited as "Green Bursa" in a reference to the beautiful parks and gardens located across its urban tissue, as well as to the vast forests in rich variety that extend in its surrounding region. The city is synonymous with the mountain Uluda which towers behind the city core and which is also a famous ski resort. The mausoleums of early Ottoman sultans are located in Bursa and the numerous edifices built throughout the Ottoman period constitute the city's main landmarks. The surrounding fertile plain, its thermal baths, several interesting museums, notably a rich museum of archaeology, and a rather orderly urban growth are further principal elements that complete Bursa's overall picture.

On Free Time for activities in Bursa (ATV Safari, Zipline) Guest pay their own expense.