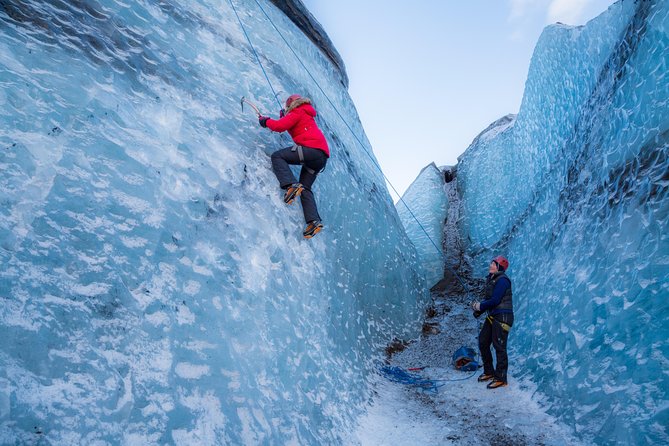 Embark on an adventurous journey from Reykjavik to Icelands Slheimajkull Glacier. Your expert guide will take you glacier hiking and ice climbing on this magnificent natural phenomenon -- a rugged, raw and ever-changing hub of ancient frozen water. Take in the spectacular views while exploring one of Iceland's most beautiful and striking natural wonders. No experience is necessary!

Take a day trip from Reykjavik to experience Iceland's stunning nature and picturesque views from the outlet of the Myrdalsjokull Glacier -- the Slheimajkull Glacier. After hotel pickup in Reykjavik in the morning, enjoy a relaxing coach ride to your destination in the southwest of Iceland, where your experienced guide will give you a brief safety introduction before leading you on a hike on the Slheimajkull Glacier.

Walk across this magnificent phenomenon -- a rugged, raw and ever-changing hub of ancient frozen water. The ice tongue, termed because the glacier crawls toward the ocean and forms a long outlet of ice, will amaze you with unique, breathtaking views. With your guide, explore the outlet glacier with its amazing ice formations, crevasses, sink holes, deep cracks and jagged ridges.

When you reach an ice wall, try your hand at ice climbing! Having all the safety tools you need, such as ice axes, crampons and safety lines, brave the heights and be rewarded throughout the whole climb with stunning natural sights, making this trip an experience you wont forget.

After your glacier adventure, stop at the beautiful Skgafoss waterfall, one of Iceland's largest waterfalls, before returning to Reykjavik.

An introduction to ice climbing

Free wi-fi on board

Hiking shoes (can be rented for a small fee)

Please note that jeans are not appropriate for a glacier hike

Hiking shoes, waterproof jacket and pants can be rented from the operator for a small fee