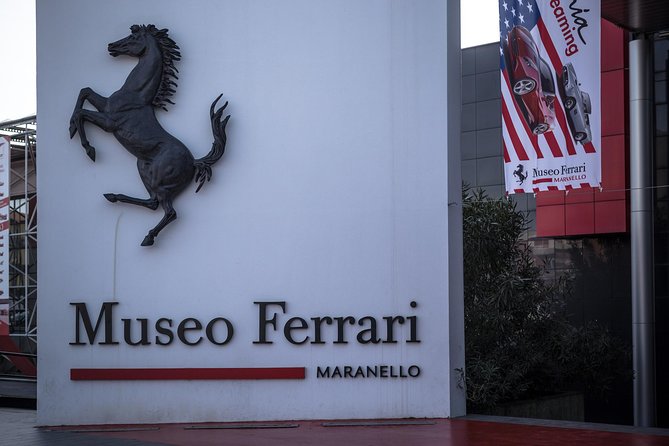 Visit the Ferrari Museum to live the Prancing Horse dream first-hand! Discover the history of Italy's most iconic car manufacturer!

Itinerary
This is a typical itinerary for this product
Stop At: Piazza Maggiore, 40121 Bologna Italy
Piazza Maggiore is located in the very centre of Bologna. In the past, the square underwent many changes and was embellished with important buildings: the Basilica di San Petronio, Palazzo dei Notai, Palazzo d'Accursio, Palazzo del Podest and Palazzo dei Bianchi.
Duration: 30 minutes
Stop At: Museo Ferrari, Via Dino Ferrari 43, 41053, Maranello Italy
Opened in 2012, the Museo Enzo Ferrari includes two buildings: Enzo Ferraris birthplace, the cultural and architectural centre of the whole museum, and a new exhibition gallery surrounding the House.
Duration: 3 hours
Stop At: Le Due Torri Torre degli Asinell, Piazza di Porta Ravegnana, 40126 Bologna Italy
The two towers are the symbol of Bologna and they are strategically placed at the entry point in the city of the ancient Via Emilia.
The Torre degli Asinelli is the tallest leaning medieval tower in the world and it was built between 1109 and 1119. It is 97,20 m tall and was built by the Asinelli family.
The second tower, Torre Garisenda is less taller than the first one, it is just 47 metres tall.
Duration: 1 hour
Stop At: Basilica - Santuario di Santo Stefano, Via Santo Stefano 24, 40125 Bologna Italy
The basilica of Santo Stefano encompasses a complex of religious edifices in the city of Bologna is located on Piazza Santo Stefano.
The Basilica di Santo Stefano, also known as Sette Chiese, is the most peculiar in Bologna. Its name derives from the original idea of dividing the church in seven chuches. Others believe it was commissioned by Saint Petronio, but built on top of the ruins of a pagan temple, next to which other buildings were added.
Duration: 1 hour