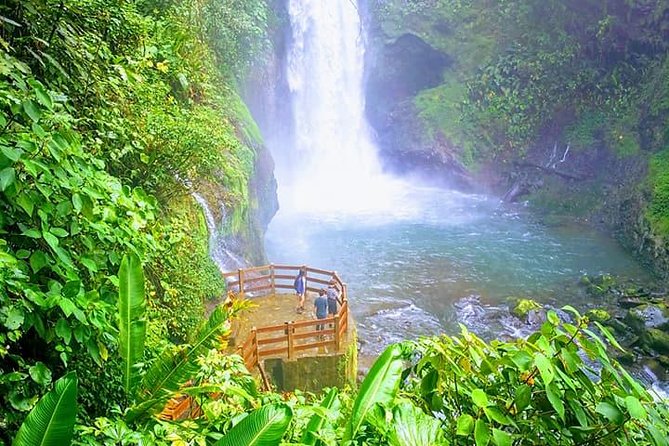 Let us take you to a real coffee plantation, experiment and see how is the technique and the process of sowing, harvesting and producing this important grain. Later we will go to one of the most visited places in Costa Rica (La Paz Waterfall Gardens) .The waterfall is located immediately alongside the road from Alajuela that leads to the northern plains of Costa Rica. TheRiver La Pazforms the waterfall after traversing 8 kilometres (5mi) ofvolcanicterrain, and then continues through therainforestof the eastern side ofPos Volcano. A short path leads behind the waterfall, where a small shrine had been located. Upstream from the waterfall is La Paz Waterfall Gardens, a park, where visitors can observe many different species of local wildlife.

The tour begins with an early pick up at your selected hotel. The tour bus then hits the Pan-American Highway en route to Alajuela (where other participants are picked up) before continuing on to the Doka Estate Coffee Plantations.

As we ascend, we will notice a change in temperature and vegetation; we will see coffee plantations as well as fern, flower and strawberry farms along the way. Along the trip, youll learn about the golden bean as coffee is sometimes called in Costa Rica and its importance to the local culture and economy.

We will visit the Doka Coffee Estate for a delicious breakfast. Then we will be treated to a coffee tour in an actual coffee plantation where we will learn the ancient techniques used by the experts to produce some of the best coffee in Costa Rica.

The Doka Coffee Estate is set along the slopes of the Poás Volcano and has grown coffee for three generations. The tour begins in the field, where your guide will teach you about the biology of the plant and its relevance at both a local and global scale. Youll then visit the processing plant which was declared an Architectural Heritage for Humanity site in 2003, and watch as beans are de-pulped and fermented. The final stop is the roasting plant and café, where youll learn about and sample the estates eight blends of coffee.

After the coffee tour we will continue to the La Paz Water Fall Garden for a scrumptious lunch and tour. As we arrive to La Paz, we will walk through a trail, leading to a spectacular waterfall in the middle of the rainforest. Inside the park we will also visit the hummingbird gallery, the serpentarium, the bird house, the butterfly garden and the frogs exhibit.

The jungle cats exhibit is another attraction at La Paz Waterfalls Garden. The jungle cats stay in captivity because they cannot be released back into the wild - most of them were old, injured or were exposed to humans for too long. During the tour, you can observe them and learn a lot about the felines species in Costa Rica.