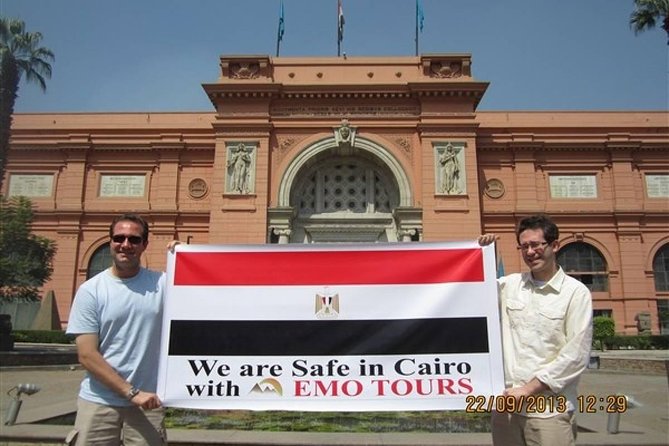 Private guided tours in Cairo Startsat 8:00 am Pick up from your hotelCairo or Giza By guide to Start your full day tour visitingthe Egyptian Museum of antiquities. It displays the largest and most precious items of the Egyptian art in the world. It exhibits a rare collection of over 250,000 genuine artifacts that date as far back as 5000 years, including an exclusive exhibit dedicated tothe Tutankhamon - A collection of treasures, gold, and jewelry that were buried in his tomb for over 3,500 years before they were discovered in the 1920s when his tomb was excavated.

Then visiting Old Cairothat known asChristian CopticCairo which is Among the most important locations visited by the Holy Family where the spiritual impact of their presence is most felt still; though their stay was brief, for the Governor of what was then Fustat enraged by the tumbling down of idols at Jesus' approach sought to kill the Child. But they took shelter from his wrath in a cave above which, in later years, the Church of Abu Serga (St Sergius) was built. This, and the whole area of the Fort of Babylon is a destination of pilgrimage not only for the Egyptians but for Christians from around the world. An air of piety and devotion pervades the whole district theresynagogue - Ben Ezra Synagogue.

any Optional Tours entering any of the Mummies Room.it Requires additional Tickets can be bought during the visit Mummies Room at Museum 10.50