Day Trip To El Kab And Edfu From Luxor

Day Trip To El Kab And Edfu From Luxor 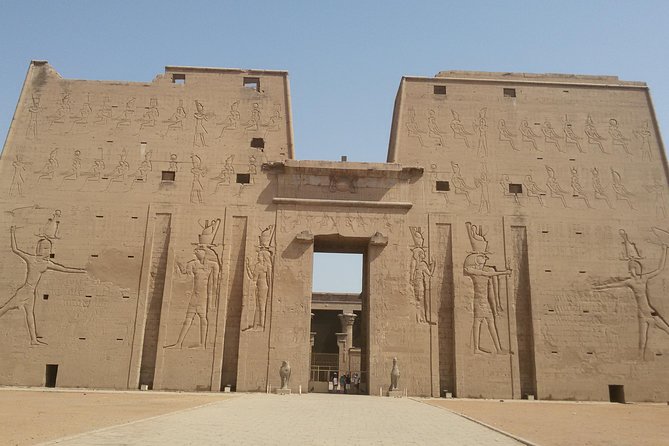 Enjoy a fantastic Day trip to el Kab and Edfu temple from Luxor in accompany of an Egyptologist tour guide, visit El Kab tombs and the ruins of the ancient Nekhen capital of upper Egypt and the Temple of Horus at Edfu, the best preserved temple of Egypt temples.

Nile Holiday expert tour Guide will pick you up your Hotel in Luxor and accompany you to visit to El Kab, a rock cut tombs of the early 18th Dynasty (15501295 BC), located on the east bank of the Nile about 80km to the south of Luxor. At El Kab, explore the tomb of Ahmose, son of Ibana, contains biographical texts regarding the wars of liberation against the Hyksos rulers when the southern princes laid siege to the town of Avaris in the Delta. The tombs of Paheri and Renni, the mayors of Nekheb during the 18th dynasty, show agricultural and offerings scenes as well as the tomb of Setau, a priest in the service of Nekhbet during the reign of Ramses III.
Discover the ruins and the mud bricks outer wall of the ancient Nekhen, the religious and political capital of Upper Egypt at the end of the Predynastic period (c. 3200 3100 BC). The center of worship of the Goddess Nekhbet, the white vulture goddess and protector of the Pharaoh as goddess of Upper Egypt (south). Continue to visit the Temple of Horus at Edfu. The sand has helped to preserve the Temple which was found to be almost completely intact, when it was first cleared and excavated by Auguste Mariette in the 1860s. Edfu Temple structure was started by Ptolemy III Euergetes in 237 and was not completed by Ptolemy XII Auletes in 57 BC.
The Temple walls inscriptions provide important information on language, myth and religion during the Greco-Roman period. Specially, the sacred marriage scene between Horus and Hathor, the Temples foundation scenes, and the battle between Horus and Seth.
After finishing, you will be transferred back to your hotel in Luxor east bank.

Entry/Admission - Temple of Horus at Edfu