Day Trip To Lucerne And Engelberg From Zurich - With Reviews & Ratings

Day Trip To Lucerne And Engelberg From Zurich 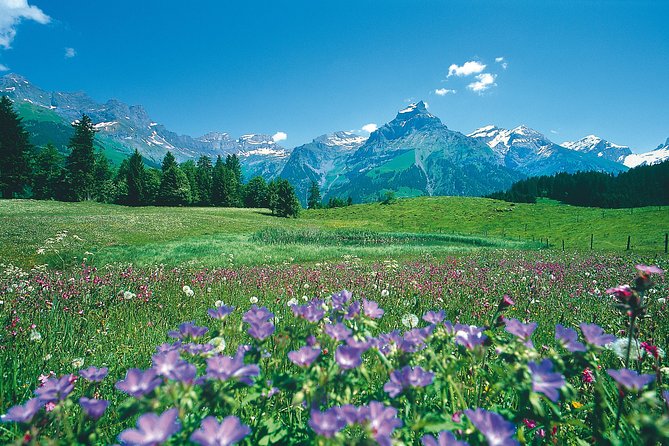 While in Switzerland, breathe in the fresh mountain air on this day trip to Lucerne and Engelberg from Zurich. Passing the beautiful natural landscape of the Swiss Alps and Lake Zurich, travel by comfortable coach to Lucerne. Spend the first part of your day in this picturesque Swiss town and tour its highlights such as the Chapel Bridge and Town Hall. Then, continue to Engelberg, a famous mountain resort where youll explore the main sites on your own; tour a traditional Swiss cheese factory or visit the Baroque-style monastery. If you're feeling more active, try out one of the many hiking trails through the valley.

On this day trip to Lucerne and Engelberg, travel from Zurich by comfortable coach through the scenic Swiss Alps via Albis Pass and along the shores of the Lake Lucerne.

During your drive into Lucerne, the guide will tell you some historical anecdotes about this Swiss town and will point out the main sites such as the Chapel Bridge, Town Hall and the new Concert and Congress Hall . Afterwards you have approximately 50 - 60 minutes time to explore Lucerne by yourself.

Continue on a breathtaking journey up to the mountain resort town of Engelberg. A typical Swiss alpine town in the canton of Obwalden, Engelberg is located in the sunny basin under the north face of Mt Titlis and is one of Switzerlands leading mountain resorts. Visitors flock here in both summer and winter to take advantage of its natural features and sporting opportunities and to watch the ski jumping world cup at Gross-Titlis-Schanze.
This part of the trip will be unguided but feel free to explore at your leisure. Stroll around the village on your own and take the opportunity to tour a traditional Swiss cheese factory located in a monastery. Here, see an impressive collection of regional cheeses and other milk products. Enjoy doing some shopping or trying one of the traditional cheese specialties in the Bistro (own expense).
Visit the imposing Baroque-style monastery and learn about how Engelberg was originally founded by the Benedictine monks. Alternatively, take one of the many local hiking trails and explore the valley on foot while enjoying the peace and tranquility of this part of the Swiss Alps.

At the end of the day, meet your guide at the arranged time and board your coach for the journey back to Zurich.

Only a limited number of shops are open on Sundays.