Day Trip To Osorno Volcano And Petrohue From Puerto Varas 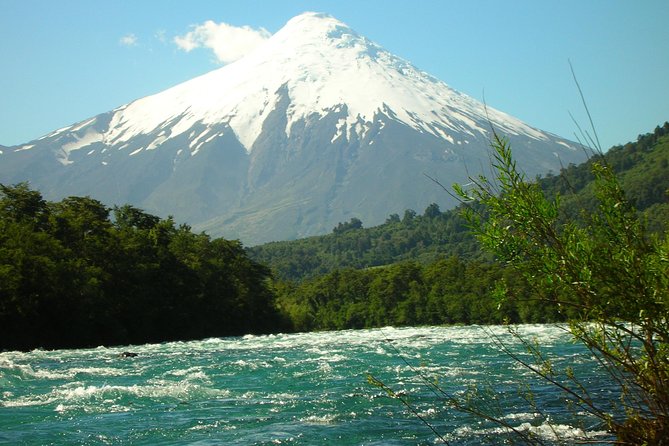 You will be picked up at your centrally located hotel.
It will not start from Cruiser ship or from the Puerto Montt port

Departing from Puerto varas The City of the Roses going to Osorno Volcano, by the shore of Llanquihue Lake, we'll enjoy the amazing landscape with the Osorno and Calbuco volcanoes, until we get to Ensenada where we start to ascend to the Osorno Centro de Ski y Montaa, located at 3937 feet (1240 m).

There we'll stay for about an hour enjoying time for sightseeing, taking pictures and appreciating a unique view to the summit of the volcano with glaciers of eternal snow, the Calbuco, Lake Llanquihue and the Pacific Ocean.

As an option, you can get a cup of coffee or a sandwich at the coffee shop of the place or take the lift to ascend to 4757 feet (1450 m) altitude in the Station Primavera or 5741 feet (1750 m) at Station Glaciar where there is a wonderful and breathtaking view of Lake Llanquihue. (These services are not included in the price of the tour).

Later we will go to Petrohue at Vicente Perez Rosales National Park, on a road by the Llanquihue Lake shore, enjoying the landscape and magnificent view of the volcanoes Osorno and Calbuco until we get to Petrohue located near by Todos los Santos Lake.

There we can take a walk surrounded by an evergreen forest, the Osorno Volcano and the beautiful Turquoise color of Petrohu River.

By paying an entrance fee to the National Park, we get to see one of the most beautiful places in the country, Petrohu River Falls. You cant miss it.

Transportation by car or minibus

Guide in Spanish, English or Portuguese throughout the visit

Optional Gratuities for driver and guide

Meals and drinks not specified