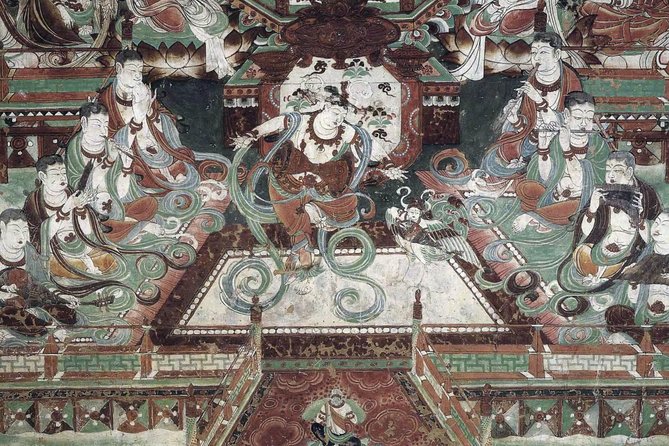 Yulin Caves and Western Thousand Buddha Caves are less popular than Mogao Caves, however, they are part of the Dunhuang art with their spectacular frescoes and statues in Dunhuang. This tour will let you explore these two sites in a day.

At 8am, your guide will meet you at your hotel lobby centrally located in Dunhuang with a Viator signage writing your name on. Then you will go to Western Thousand Buddha Caves firstly, which is 35 km away from the downtown. Most of the caves were built in Northern Wei Dynasty (386-534 A.D) and Tang Dynasty (618-907 A.D), and damaged badly due to its location close to the Dang River. However, there are fewer tourists than Mogao caves, you can visit some caves with well-preserved frescoes and statues comparatively.

Afterwards you will drive about 2 hours to Yulin Caves that is about 710 km from Dunhuang. The Yulin Caves were built on bank cliffs at two sides of the Yulin River valley. There are now 42 major caves in existence together with hundreds of others scattered around, 31 on the east bank and 11 on the west bank. The first group of caves was built in the Northern Wei dynasty and in the following dynasties more caves were cut or restored. The forms of caves and contents of paintings show close connection with those in the Mogao Grottoes so they are important constitute parts of Dunhuang art complex, and have great historical and art value. The grottoes preserve nearly one thousand statues and more than one thousand-square-meters frescoes. You will follow the cave guide to visit some caves to learn the history.

Lunch is included today. Later you will be transferred back to your hotel in Dunhuang where the historical day trip concludes.

Note: The entrance fees for both caves are only for regular caves, and you can pay locally if you would like to visit special caves.

Passport name, number, and country is required at time of booking for all participants

Adult pricing applies to all travelers over 3 years old