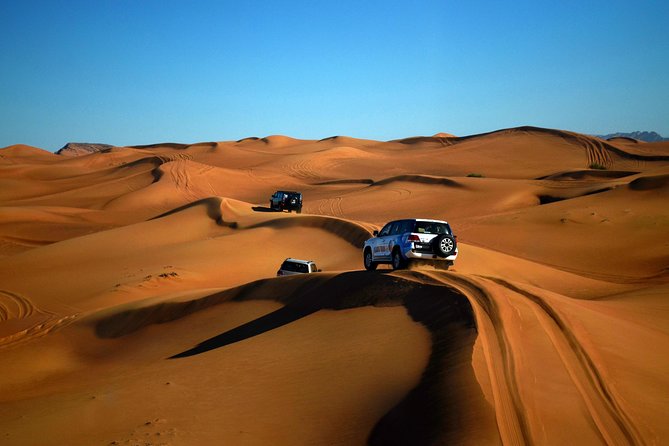 Your trip to the U.A.E. will not be fulfilled without exploring the magnificent activities of the evening desert safari. Spend a thrilling evening in the desert. Enjoy dunes bashing followed by a barbecue dinner and live entertainment (5 - 6 hrs duration).

This fascinating tour starts from your location (located within Sharjah area). You'll be picked up by 4x4 wheel between 15:00hrs and 15:30hrs. On this tour experience the thrill of a roller coaster ride on the sand dunes for 20 - 30 minutes.

We stop on the highest sand dune to view the stunning sunset, a great chance to take amazing photographs. We then continue our journey to the desert camp located in the heart of the desert,you can take theshort camel ride, sand board, go inside the camp for your BBQdinner, with unlimited drinks (soft drinks, water, tea or coffee). A wine/liquor counter is available sometimes but you have to pay cash directly to the counter only.

By 20:30hrs you will be dropped back to your hotel. In order for you to remember the driver you came with,take a photo of him and the vehicle plate number because it will be rushed afterwards.

Welcome drinks such as Arabic coffee, tea, and water