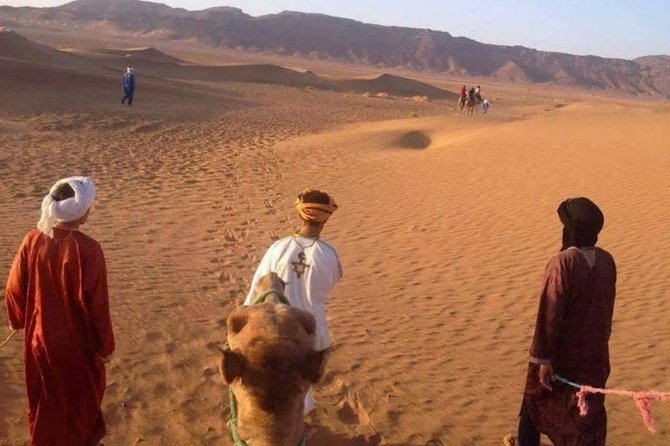 This is best option for you, if you want to discover the different facets of Morocco in a little time.
This unique experience brings you , from Casablanca the famous and big city to the biggest dunes of Morocco: Erg CHEGAGA; where you will listen to the sound of selince.
This is an unforgettable trip with your driver guide who speaks English well and who transfers his knowledge about Morocco.
This is a private trip in which you will enjoy different landscapes combining mountains, valleys, oasis and sand dunes.
Apart from the desert and its original beauty, you can also make a visit to the magical city of Marrakech and Ouarzazate, This quite city is commonly called HOLLYOD of Africa because of its beautiful natural trays and also to its movie studio and kasbahs.
Your destination ERG CHEGAGA is little known by tourists, where you find there alone or you cross few people, which allows you to get out of the ordinary life, You can taste a tasty and bio food.

DAY 1:Casablanca to Ouarzazate through Marrakech

The fascinating movement of the first day involves going from Casablanca to Ouarzazate through Marrakech. Your English speaking driver meet and great you at 7 am in your accommmodation in Casablanca or Airport.

The journey would also be met with a brief stop at Marrakech, which is an interesting stop-over for many visitors. Marrakech is popularly referred to as the magical city, and you would love the sight of the environment. After that, the journey continues through the great Tizi-n-Tichka pass, which is Moroccos highest road passage that boasts of an altitude of 2260m, which provides an exhilarating experience for the tourist. More so, night and diner at the quiet Guest house : KASBAH ZAITOUNE.

The second day has another interesting ride from Ouarzazate. The morning ride moves towards Agdz, from which the ancient caravan road would be used as the ride goes through Zagora. A launch would be served at Zagora, from which the ride proceeds to Mhamid down towards the destination for the day, which is the famous Erg Lihoudi. Erg Lihoudi provides a good environment to enjoy camel ride for 2 hours before night time.
Diner and night at Desert camp of Caravane du sud in a private and sophistecated tents.
DAY 3:Mhamid to Erg Chigaga

The third day begins with a sumptuous breakfast and a return to Mhamid. The journey to Mhamid takes approximately two hours as it would be by camel ride. After that, the departure to Chegaga begins, Chegaga movement is via a 4x4, making it convenient to cross the various desert landscape without much stress. Arriving at Berber tents, launch would be served at that point, while the much-awaited exploration of the dunes would take place when it is afternoon. Dinner would be served at sunset as the night would also be spent at the Cravane du sud camp in CHEGAGA, ( The biggest sand dunes in Morocco)

Breakfast is served in the desert on the forth day, while departure begins with the use of a 4x4 through the desert in around 90 km journey that would enable you to come in contact with the iriqui lake.
The sight of the lake is quite an interesting aspect of the journey. A launch stop-over would be experienced at FoumZguid, and after that, the journey continues to Marrakech via Taznakht. It is expected that the journey to Marrakech would be concluded at 7:30 pm as expected.
Night and diner :Riad Bayti or similar.

DAY 5:Marrakech to Casablanca:An awesome moment is experienced on the fifth day with a city tour of Marrakech, and after the tour, the needed return to Casablanca begins.

Accommodation as per itinerary:

4 nights accommodation: 1 night at guest house in Ouarzazate, one night in Riad in Marrakech and two night at the desert camp

Lunch for the two days on the desert