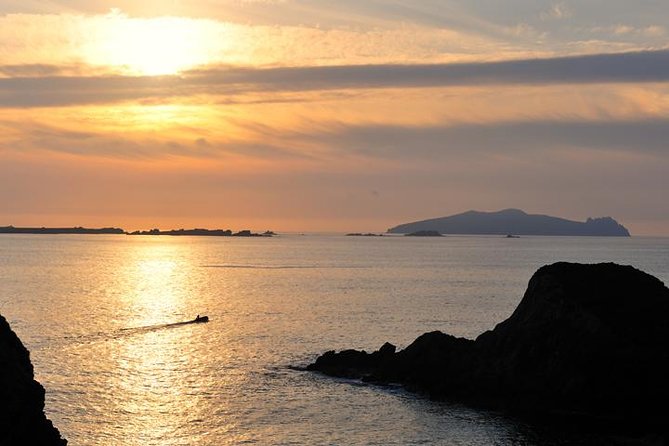 The Dingle Peninsula or Corca Dhuibhne stretches 30 miles into the Atlantic Ocean from Irelands southwest coast. Along the 'Wild Atlantic Way,' the peninsula is dominated by the range of mountains that form its spine, running from the Slieve Mish range to Mount Brandon, Irelands second highest peak. The coastline consists of steep sea-cliffs, broken by sandy beaches and the home to many a Hollywood movie sets as your driver/guide will explain.

Departing fromKinsale in the morning you'll head south passing through some picturesque villages like Ballyvourney and Ballingeary, famous north Cork Gealtachta areas where th irish language is alive and well and spoken on a daily basis.We than carry on over the Cork and Kerry mountainsa scenic drive than into Killarney where our tour begins, known for its Cathedrals and of course the Country Park. For 250 years, Killarney has been a key tourist destination. Heading out on your peninsular drive, the first stop will be Inch beach,' one of the longest beaches in Ireland. Perhaps you'll want to dip your feet in the Atlantic Ocean. Inch is home to many movies sets including Playboy of The Western World and Ryans Daughter.

Leaving Inch, the tour continues along the coastal drive to the Gaeltacht, where Ireland's native Celtic language is spoken. Once you arrive in Dingle, your driver/guide will tell you about 'Fungi' the Dolphin who makes his home here. Boats go out to visit him on an hourly basis and Dingle is well known for the friendly locals. Dingle is a colorful town with a very busy harbor.

Out along the rugged coastline, you'll make your way along The Slea Head Drive, elevated approximately 330 feet (100 meters) above the ocean. To your left, you'll see the Atlantic Ocean and to your right, mountains. You'll enjoy views over The Skelligs (islands), made famous by the new Star Wars movie. It is one of the oldest inhabited places in the world. Notice the 600 steps up a rock to the top of the island is where the Skellig monks lived for many years in their beehive huts. View The Blasket Islands and Dead Mans Island, which are truly picturesque. Also on this route, you will see where the movie Far and Away was filmed and it was here where Tom Cruise met Nicole Kidman.

If you would like, you can stop at the fertility stone and see The Three Sisters Peaks and Mount Brandon which is the second tallest mountain in Ireland. After enjoying all that fresh air and sightseeing, you will return to Dingle for some lunch and maybe a pint (at own expense). Upon completion of the tour, you will return to Limerick.