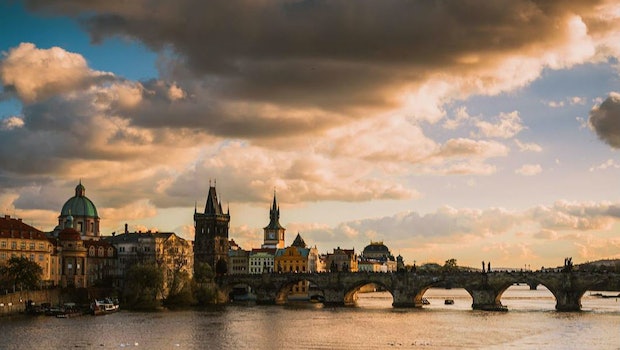 A nighttime feast for all your senses

The cruise is a languid and charming affair. It takes three hours to wind its way along the Vltava river, and as it does you’ll take in The City of a Hundred Spires from the unique vantage point of the water. The lights of Prague Castle - the world’s largest - will glint in the distance, while the Charles bridge lies ahead. It’s one of Europe’s grand bridges, and the place where the city comes to find its proud and stately self: Bohemian kings would pass along it on the Royal Route as they went to be crowned.

You’ll be reminded of Prague’s cosmopolitan heritage when you pass under the ech and Mánes Bridges - the former is the country’s only large Art Nouveau bridge, while the latter owes its form to the Czech Cubist movement of the 1910s. It’s not all rarefied art though, if you keep an eye out you might spot a gargoyle or two, and the Prague coat of arms.

There’s more in store for your senses. A complimentary pilsner awaits (or other drink of your choice, but really why would you?) while the buffet dinner serves local and international delicacies. And the *coup de grce*: a live band provides the perfect soundtrack to your starry voyage... All in all, you'll definitely want to add this to your Czech list.