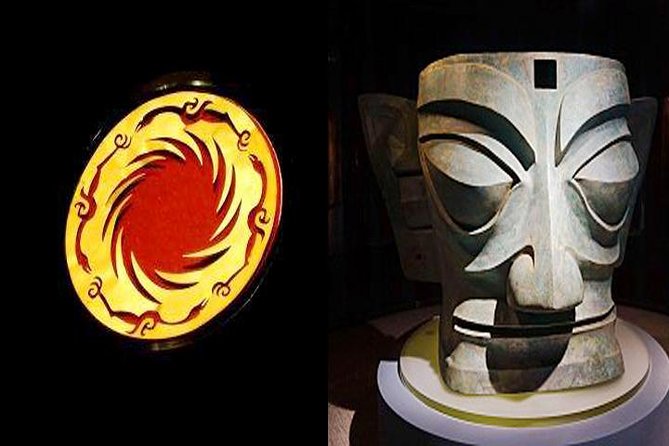 Sanxingdui site culture boasts as the Ninth wonder in the world and one of the most important archaeological discovery in the 20th century. This ancient culture had a well developed bronze casting culture which permitted the manufacture of many impressive articles, for instance, the world's oldest life-size standing humanstatue, and a bronzetreewith birds, flowers, and ornaments.The most striking finds were dozens of large bronze masks and heads represented with angular human features, exaggerated almond-shaped eyes, some with protruding pupils, and large upper ears.
The Jinsha site was accidentally discovered in February 2001. The site flourished around 1000BC and shares similarities in burial objects with the Sanxingdui site. Ivory, jade artifacts, bronze objects, gold objects and carved stone objects were found at the site.Today, our English guide will go with you to find out the secrets and connections between those 2 ancient mysteries.

7:30am we will pick you up at you hotel in Chengdu downtown.
7:30am-9:00am we will drive about 1.5hours from Chengdu to Sanxingdui site in Guanghan.
9:00am-12:00 Our excellent English guide will introduce you this mysterious treasure carefully. You will see the first golden stick in the world, the largest bronze standing man in the world(2.65 meters), the tallest bronze tree in the world(3.95 meters), over 70 pieces of Bronze and Golden masks and over 1000 pieces of Jade, Gold, Bronze, pottery relics.
12:00-13:00 Lunch time
13:00-15:00 Drive from Sanxingdui to Jinsha Archaeological site in Chengdu downtown.
15:00-17:00 Visit the archaeological site to see how the workers brush the earth and get the relics out from the earth and also visit the exhibition hall to find out the secrets and connections between Jinsha and Sanxingdui.
17:00-17:30 Drive you back your Chengdu downtown hotel.

Private car (BMW X1 or Toyota Camry) with all the petrol, toll and car parking fee

All other person expenses

Transportation Method: If there are over 4 persons with you, please contact me directly. I will then create a customized tour for you.