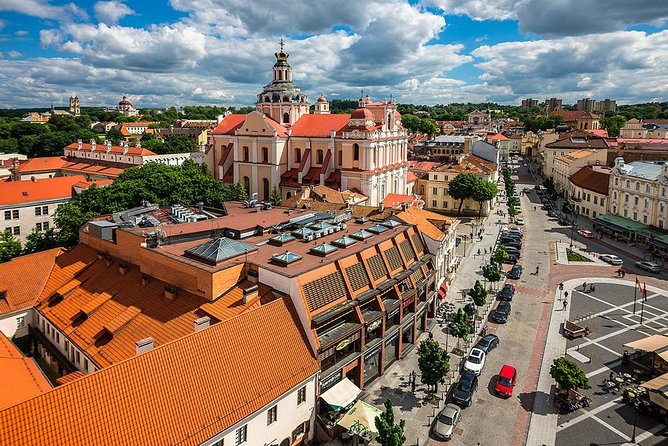 Make the most of your visit to Vilnius. Discover the medieval heart of Vilnius on a comprehensive old town walking tour taking you to the superb views of the Gediminas Castle Hill. Highly professional private tour guides and fast-track admission to museums will make your trip to Vilnius a truly memorable one!

Itinerary
This is a typical itinerary for this product
Stop At: Gate of Dawn, Ausros Vartu g. 14, Vilnius 01303 Lithuania
Meet your guide in the lobby of your centrally located hotel. The guide will have a sign with your name on it.
Once a flourishing capital of Grand Duchy of Lithuania formed by historic alliances with neighboring Poland, Vilnius is today a modern European city with a rich cultural heritage to offer.
We will start our stroll through the cobbled streets of the Old Town with a walk down the magnificent Gediminas Avenue at the Gates of Dawn, the only remaining historical gate to Vilnius city.
Duration: 30 minutes
Stop At: Gediminas Avenue, Vilnius Lithuania
Most governmental institutions of Lithuania are concentrated on this main street named after the Grand Duke of Lithuania, Gediminas. It is partially a pedestrian street in the evenings when the traffic is prohibited.
We will see the National Drama Theatre, Bank of Lithuania, National Library and City Hall Square.
Duration: 30 minutes
Stop At: St. Casimir's Church, Didzioji g. 34, Vilnius 01128 Lithuania
Founded by the Jesuits and dedicated to Lithuanias patron saint Casimir (v. Kazimieras, 1458-1484), construction on this mighty building began in 1604 and was completed in 1635. Burnt to the ground 20 years later when the Russians invaded in 1655, fire visited twice again within the next century in 1709 and 1749 before Tomas ebrauskas (Pol. Thomas Zubrwka, 1714-1758) restored it to more or less the form it's seen in today. A victim of many fates like most churches in the city, after spending time as a museum of atheism, the church was return to its rightful owners in 1988 and re-consecrated three years later. Its since undergone a massive renovation project, restoring its predominantly Baroque style with Gothic and Renaissance touches. Of particular interest inside are three Late Baroque altars and a recently discovered 17th-century crypt containing dark bas-reliefs featuring miscellaneous religious motifs.
Duration: 10 minutes
Stop At: St. Anne's Church, Maironio g. 8, Vilnius 01124 Lithuania
Located in the geographical center of Europe, the blend of Eastern and Western traditions is visible with both beautiful Roman Catholic and Russian Orthodox churches lining the old town streets. One of the most impressive facades belong to the Gothic beauty of St. Annes Church.
One of the citys most famous landmarks, St. Annes has a history that starts with the alleged construction in the 14th century of a wooden house of worship on this spot in honour of Ona, the wife of Vytautas the Great. The current Gothic masterpiece is believed to have been built between 1495 and 1500 to a design by the Bohemian architect Benedikt Rejt (1453-1534), most famous for designing parts of Prague Castle. Unlike other historical churches in Vilnius, St. Annes has managed to escape the ravages of time almost unscathed and is arguably the least changed of them all. Composed of 33 different styles of brick assembled into a delicate and intricate whole, the effect is simply quite stunning. Visiting in 1812, Napoleon said that he wanted to take the building back to Paris on the palm of his hand.
Duration: 10 minutes
Stop At: Vilnius University (Vilniaus Universitetas), Universiteto 3, Vilnius Lithuania
Following a sneak into the hidden courtyards of Vilnius University we will also enjoy an inside visit of the Vilnius University.
Established in 1579 and one of the oldest universities in Eastern Europe, the ensemble that makes up Vilnius Universitys main campus buildings embraces just about every major architectural style of the last 400 years. Closed for much of the 19th and the first 18 years of the 20th century, famous students who studied here include the Romantic poets Adam Mickiewicz and Juliusz Sowacki, the writer and historian Simonas Daukantas and the Nobel-winning author Czesaw Miosz.
Duration: 30 minutes
Stop At: Presidential Palace, Daukanto aikste 3/8, Vilnius Lithuania
The official residence of the President of Lithuania, this gleaming white palace started life in the 14th century as a much smaller structure. Gaining its Classical appearance much later, it remained the home of the cream of the citys Catholic clergy until the 1795 Partition when it became the residence of Vilnius tsarist governors. Many illustrious figures have spent the night in the building over the centuries, among them Tsar Alexander I, Napoleon Bonaparte and Jzef Pisudski to name but a few.
Duration: 10 minutes
Stop At: Vilnius Cathedral Square, Vilnius 01143 Lithuania
The Vilnius Cathedral is an important part of Lithuanian cultural heritage. During its long history, the place has been destroyed and reconstructed countless times, and today it proudly stands in the hert of the city and is the center of all festivities be it religious, ethnic or national.
The Catherdral is surrounded by the Catherdral Square, which served as a location of the defense wall, towers and the Bishops Palace. Nowadays, the Square is full of life day and night, with tourists and locals alike, couples, bikers and skaters enjoying the captivating view of one of this beautiful cathedral and the equally gorgeous square. The square hosts countless events, concerts, festivals and celebrations.
Duration: 20 minutes
Stop At: Gediminas Tower, Arsenalo g. 3, Vilnius 01143 Lithuania
We will make our way up the historic Gediminas Hill on foot. From the old fortification tower dating back to the 15th century we are able to admire the striking hilltops and city below us.
According to local legend, Grand Duke Gediminas built the city with the will of gods after he dreamed of an Iron Wolf standing on top of this hill howling as strong and loud as a hundred wolves.
The tour comes to end end in the old old town.
Duration: 30 minutes