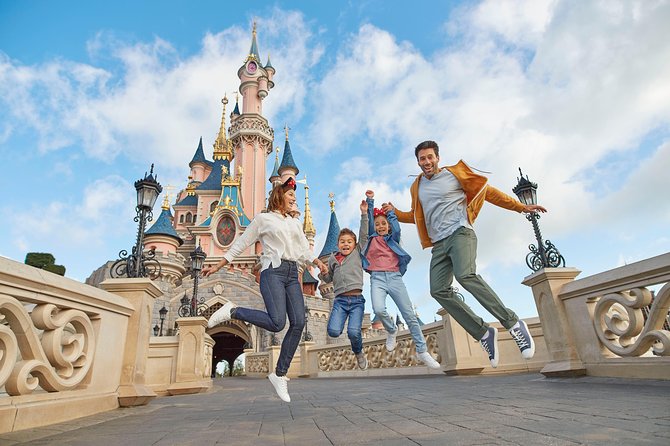 Find magic around every corner at Disneyland Paris and choose this multiday hopper ticket to visit both parks. Let the magical scenery, thrilling rides, and lively entertainment awaken your imagination. Meanwhile, over at Walt disney studios park, go behind the scenes at four studio lots. All options are available over a range of days to suit your vacation.

Live the magic for more than one day and enjoy Disneyland Paris Parks with Hopper Tickets !

These tickets are a superb value, allowing admission to both Disneyland park and Walt disney studios park with the freedom to hop between both Disney Parks as often as you like for the duration of your choice.

See the Itinerary section below for more details on each theme park.

In a Magical Kingdom not so far away — somewhere between a place where you wish upon a star and dreams come true — Disney heroes and heroines live in fairy tales that are, happily, never-ending.

Endless fun in five magical lands
Experience your favorite Disney Lands just as you remember them from the classic Disney stories, where fairy tales really do come true.

Amazing Attractions
Delight your family with thrills that come in all shapes and sizes. Space Mountain: Mission 2 offers big thrills for the grown-ups, while little ones can sail around the world at It's a Small World. Of course, family fun can be found in every corner of the park, from Pirates of the Caribbean to the Mad Hatter's Tea Cups.

Explore the studio lots
It's showbiz, folks! Make your big screen debut at Production Courtyard, Toon Studio, Backlot, and Front Lot. It's a star-studded itinerary, and you never know which star you might meet! Each has its own surprises and attractions, so where to shoot first? Art of Disney Animation®, Armageddon Special Effects, or Studio Tram Tour: Behind the Magic through Catastrophe Canyon? All shows start at scheduled times, so make sure you plan your day to make the most of all that's on offer!

Blockbuster preview attractions
Darling, you ought to be in pictures! It's your day to be discovered while exploring all there is to see at Walt Disney Studios® Park. Enjoy our top five attractions and more.
Walt Disney Studios® Park, where movie magic abounds
Go behind the scenes with magical parade and tours! Try the Studio Tram Tour: Behind the Magic or the Moteurs...Action! Stunt Show Spectacular. You'll know exactly what it's like to be a star!

Transport to and from Disneyland Paris

Please note that no amendments can be made, including name changes.

In the event of minors (aged under 18) traveling alone, a written authorization form from parents or guardians will be necessary for voucher exchange and ticket collection at Disneyland Park or Walt Disney Studios Park

2, 3 and 4 Day vouchers are valid for 6 months from the date of purchase, and the ticket given in exchange is valid for 12 months.

2, 3 & 4 Day tickets must be used within 7 days of the first day of use, but need not be on consecutive days.

Age restrictions may apply for access to certain facilities

Selected attractions require children to be accompanied by an adult.