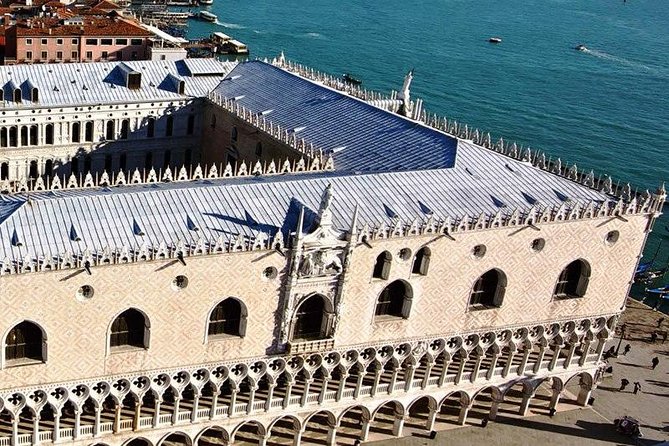 Admire Venice from the land and water on a fascinating combo tour that includes a guided visit of the Doge's palace, an unusual walk through the lesser-known areas of Venice and a charming Gondola ride. An extraordinary tour that allows you to save money and enjoy an unforgettable afternoon in Venice!

Enjoy the most appreciated and traditional sides of Venice combined in a single itinerary lasting approx. 3 hours and 30 minutes... A unique experience to learn the history of this ancient city and get in touch with the genuine everyday life that survives in the less tourist places of the historical center!

Meet the guide near St. mark's square and start your tour at the Doge's palace: here, you will enjoy a complete guided tour of the environments that have shaped the history of the Serenissima. Marvel at the Doge's private apartments, see the Giants Staircase and admire the picturesque views of St Marks Square by the floor of the Lodges. Cross the famous Bridge of sighs and visit the terrible prisons of the Venetian Republic. The guide will accompany you in one of the most interesting tours of the Doge's palace!

The second part of the itinerary will take you on a fascinating walk to discover some hidden sites between St. Marks Square and the Rialto bridge. Admire the exterior of the La Fenice Theatre and the unusual Bovolo Spiral Staircase of Contarini Palace, before joining the Rialto area and enjoy one of the most characteristic sights of Venice.

Finally, experience the magic of Venice from the water on a 30-minute Gondola ride. Marvel at the majestic architectural masterpieces overlooking the water and see some lesser known corners of Venice accessible only by water.

Please consider that this is a combo tour formed by three individual tours: book now these fascinating must-do experiences in Venice and save on the final price! The combo tour is cheaper than purchasing the single itineraries!

What is not specified under Inclusions

Explanations during the gondola ride

Please note this is a combo tour including 3 single tours

Please arrive at the meeting point at least 10 minutes before the tour departure time.

At the tour departure point you will meet a representative who will check your vouchers and give you information to do the tour.

The gondola ride might be suspended in case of bad weather. In such cases you are required to go to the tour departure point in order to know whether the tour takes place or not and any alternative ways to use the service.

Please note that, due to the particular morphological structure of Venice and the logistic problems resulting from it, we cannot guarantee that the whole tour is accessible to people with limited mobility. This means that people with walking difficulties and wheelchair users could not be able to access some parts of the itinerary.

A gondola can host up to 6 people, thus if your reservation includes more than 6 people, your group will be divided into smaller groups, or rather you will enjoy different gondolas.

This is a collective tour, so there might be other people enjoying your same gondola. In this case people belonging to your reservation can be divided into different gondolas.