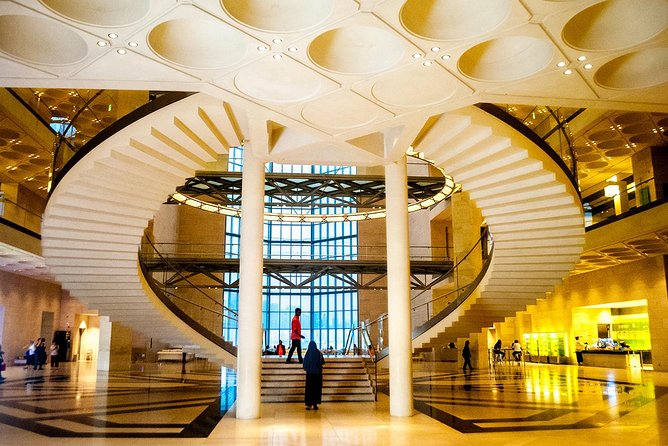 Tight on time? Catch the highlights of Qatar's capital in air-conditioned comfort on this 4-hour private express tour of Doha. Explore the Pearl, a manmade island in the shape of an oyster, admire Katara, the cultural village on the beach. Visit the Museum of Islamic Arts, and finish with a shopping trip to the Souq waqif bazaar.

Your private driver/guide will collect you from your Doha hotel at either 9am or 3pm to start your city tour: please note there are no morning departures on Fridays. You'll travel in air-conditioned comfort with included water and soft drinks.

Your first stop will be the Pearl. A remarkable artificial island created in the shape of an oyster, it's set the standard for luxury with its soft white sand beaches and upscale developments.

Next, explore Katara, the beachfront cultural village that's home to an amphitheater, an opera house, art galleries, and a range of local and international restaurants.

Get to grips with the world of Islamic arts and culture at the waterfront Museum of Islamic Arts. This stunning building is home to treasures including jewelry, ceramics, textiles, and glass, some dating all the way back to the time of the Prophet Muhammad.

Finally, delve into the Souq waqif, a traditional Arabian bazaar with a maze of alleyways. The cafes, restaurants, stalls, and stores are a captivating place to explore or shop for souvenirs.

Your tour will conclude with drop-off at your hotel at approximately 1pm or 7pm.