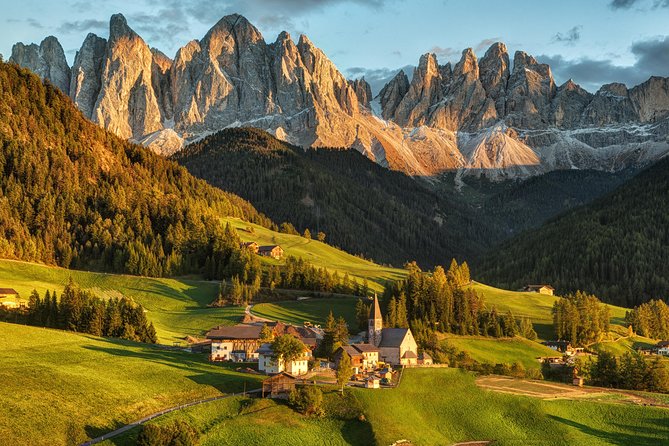 Join this wonderful excursion to discover the beauty of the most famous mountains in Europe. An unforgettable day in the middle of nature, history and culture of the Dolomiti valleys.

Start the bus tour from your pickup point in the morning. The tour guide who will explain the itinerary, what you'll do on the day and why the Dolomites Mountains are so well known and admired. There will be a short morning stop in the towns of Moena or Cavalese (it will depend on several factors, such as time and weather). These are typical towns where you can enjoy browsing through the many windows of different shops of local products, clothes or craft shops and enjoy a good cup of hot chocolate. After the short visit, the excursion will continue.

Arrive at an altitude of approximately 7300 feet (2240m) to Pordoi pass where the most important summit can be admired. From here you will be able to see the famous Marmolada, Sella and Catinaccio summits. There will be free time for lunch and for taking some pictures of this awesome place.

In the afternoon the bus will stop at a typical resort in the town of Ortisei, well known for wood carvings. This mountain village is known throughout world by ski lovers for its beautiful wood buildings, church and shops. A nice occasion to buy a souvenir from the Dolomites.

After the excursion, return by bus to the starting point. The itinerary may vary depending on the weather forecast and the traffic.

Please reconfirm with tour operator prior to travel