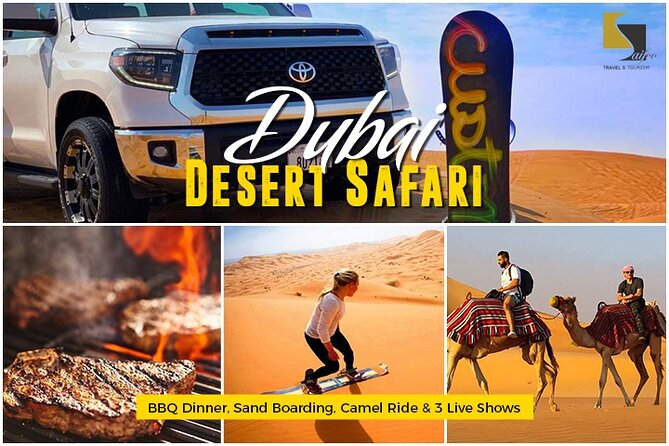 Enjoy this 6-hour Dubai Desert safari tour full of fun and heart-stopping activities in one of the biggest as well as magnificent deserts in the Arabian Peninsula. Your Desert safari trip is a mix of adventure, cultural entertainment, and sumptuous dinner under the stars.
The real highlight of the Desert safari tour is an exciting, adrenaline-pumping 44 drive deep into the desert to explore the vast stretch of the golden dunes by plummeting low in the deep ditches and escalating high on the summit of the dunes. This is followed by a visit to a traditional Arabic Bedouin campsite, which enables you to capture the real essence and beauty of the desert, as you relish traditional Arabic coffee, smoke a flavored shisha, and rivet in mesmerizing belly dance movements, Tanura and fire shows.

In this 6 hours tour, discover the beautiful landscape of the Golden Dubai Desert. You will be picked up from your hotel/ accommodation in a sharing 4WD Air-Conditioned Land Cruiser. Then headed to the middle of the desert on approximately 45 mins drive to the first destination. Upon arrival, there will be a short stopover for about 30 mins. Freshen up yourself while your safari driver will deflate tires to get ready for desert ride. Take a rest room break while our team are waiting to catch up the convoy or you can enjoy optional Quad Bike Ride on additional cost.
Then experience Dune Bashing and explore landscape of Dubai Desert in a 4WD. Then have a stop over and enjoy the panoramic view of the Sunset meantime you can enjoy Sand boarding.
Experience a traditional Arabic welcome of coffee, fresh dates, falafel and shawarma upon arrival at the camp site. Take a short camel ride (you can repeat it). Relax in the traditional Bedouin desert camp. Take a photo in local costume. Get a traditional henna painting/Tattoo on your body. Experience smoking shisha. Then enjoy Arabian Buffet Dinner (veg and non-veg) under the stars followed by Live Entertainment including Tanura dance show, Exotic Belly Dance and Fire show.

Depart from your hotel in the afternoon for a thrilling desert drive in a 4x4 vehicle with your friendly and experienced Safari guide. Following a shared transfer, you'll drive towards Lahbab. Lahbab desert is well known for its red sand and high dunes, and offers some of the most picturesque views of the Arabian Desert

Different kinds of Quad bikes are available for hire at the meeting point. Feel the vivifying experience as you drive through challenging sand dunes.

Experience a breathtaking roller coaster drive on the high dunes . You'll enjoy the adrenaline rush as you slide across from one dune to another in the 4x4 vehicle. You'll venture deeper into the desert for the best scenic views possible, then stop for a picture on the highest dune at sunset. A fabulous view of the sun setting over the desert dunes are some of the memories you will cherish as your adventure drive continues. You'll also have the option of getting on a sand-board and going dune-gliding.

Dune Bashing (30-40 mins) in 4*4 Vehicle that are configured with guest protection roll bars.

Photography at sunset (Not always Guaranteed)

Shared Bedouin Camp in the middle of the Desert

Sand Boarding, A short Camel Ride (can be repeated)

Henna Painting, Shisha smoking (free in the shisha Area Only)

Buffet Dinner with BBQ (veg and non-veg) self service.

Photography with Falcon (on additional Charges)

During the Holy Month of Ramadan NO Belly Dance & Alcohol Drinks as per Government guidelines.

This particular tour is on SIC basis . For any upgrade of private transfers and VIP service call the service provider in advance.

Due to the adventurous nature of this trip, below 3 years old and pregnant women are not allowed during dune bashing for safety reason.

This tour/activity will have a maximum of 150 travelers