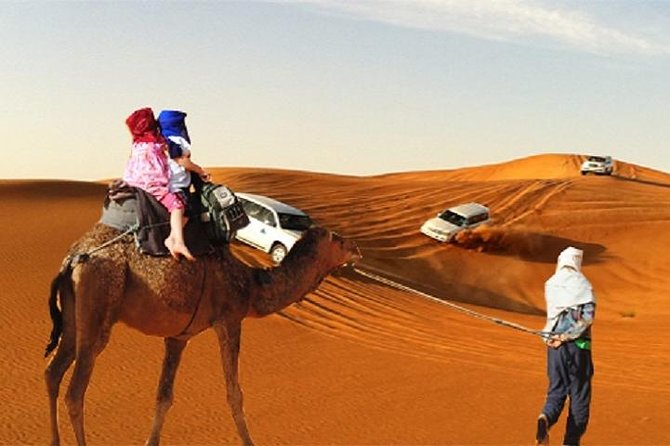 Explore the deserts of Dubai and ancient Bedouin culture of Arabia on this 6-hours adventure safari trip. Get picked up from your home place anywhere in Dubai or Sharjah and embark on an exciting journey, Enjoy a traditional ride on a camel do some sand-boarding on high sand dunes, stay in ancient style desert camp and enjoy live dancing shows. Enjoy the delicious live cooked BBQ dinner and make your day a lifetime memory with your friends or families.

Our licensed safari guide will pick you up from your home or hotel anywhere in Dubai and Sharjah. Its approximately 50 minutes drive to desert depending on traffic conditions. On the way, our English speaking guide will explain some facts about Dubai
There is a shortstop before entering the desert for tire deflation. Dune bashing starts in red sands Lehbab desert followed by photography point in the middle of the vast desert so you can capture wonderful moments of sunset.
After dune bashing, we will start the journey to the campsite where you can enjoy short camel riding, Surf on high sand dunes as lots of fun activities are waiting for you inside the camp.
Arabian traditional drinks (Gahwa) and dates are served. Enjoy the live music and dance shows. As dusk falls, delicious BBQ dinner including dishes such as kebabs, hummus, and salads are served.
Finally, our drivers will drop you back to your place.

Photography stop in the desert (10 Minutes)

Henna painting (For ladies and kids)

Sheesha smoking (For Adults Only)

Bringing your camera is recommended