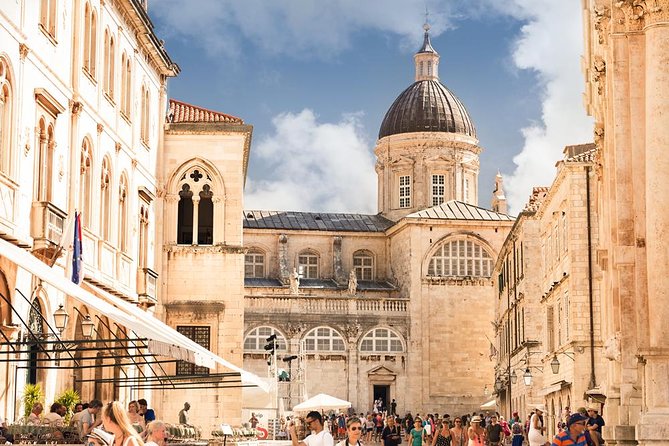 Get an insiders view of Dubrovnik on this city walking tour. The perfect way to get to know Dubrovnik, this is a must-do introductory tour for new visitors, as well as anyone interested in the citys colorful history. The tour takes place in the morning, allowing you to enjoy the citys sights and still have the afternoon to explore the city on your own. From the clock tower to the Assumption Cathedral, youll see the citys best attractions.

Stroll around the narrow streets of the Old town of Dubrovnik and experience the history and culture of this magnificent walled city. On this two-hour walking tour, your local guide will show you the citys finest sights.

Your tour begins at Pile gate; walk along the elegant main street and visit the most important sights along the way. In front of the Pile gate entrance, you'll see the circular Onofrio's Fountain, which is connected by aqueduct to a spring 7.5 miles (12 km) from town. Then see the Franciscan monastery, containing a restored sculpture of the Pieta and a gorgeous cloister dating back to the 14th century.

Continue walking to Dubrovnik's Renaissance highlight, the Sponza palace, which now houses the State Archives. Other highlights on this tour include Orlando`s Column, the City Bell tower, the Rectors Palace and the Church of St Blaise, the citys patron saint. Continue across the main square, where you will visit Dubrovnik's baroque Cathedral of the Assumption, built in the 18th century after an earthquake destroyed the original one.