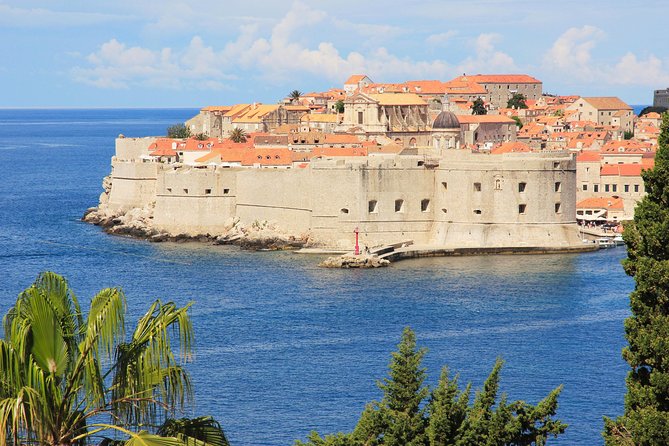 When you pull into port in Dubrovnik, admire its beautiful setting and medieval architecture on this sightseeing shore excursion in Old town. This walking tour is the perfect way to get to know Dubrovnik, as you will be accompanied by a local guide and will also have time to explore the streets of the Old town on your own. During the scenic drive to Old Town, you will have the opportunity to take beautiful pictures of the Dalmatian coast.

This walking tour through Dubrovniks Old Town is a wonderful way to spend your time in port. Your shore excursion begins with a panoramic drive where you'll get a wonderful view over Dubrovnik. You'll stop at the best viewpoint to take pictures of the stunning sights.

You continue with a guided walking tour through the old town of Dubrovnik. Beginning at Pile Gate, you'll see the circular Onofrio's Fountain in front. Keep on walking to the Franciscan Monastery, containing a gorgeous cloister dating back to the 14th century. Other highlights on this tour include Orlando`s Column, the City Bell Tower, the Rectors Palace and the Church of St Blaise. The tour also includes a visit to Dubrovnik's baroque Cathedral of the Assumption, built in the 18th century after an earthquake destroyed the original one.

When the guided portion of the walking tour is over, youll have 1.5 hours of free time to explore on your own, before you return back to your cruise ship.

Worry-free Shore Excursion:
We will ensure your timely return to the Dubrovnik port for this activity. In the rare event your ship has departed, we will arrange for transportation to the next port-of-call. If your ship is delayed and you are unable to attend this activity, your money will be refunded. See our terms and conditions for full details.

In Dubrovnik guests will have to walk approximately 500 meters over cobblestone and flat terrain, and take up to 50 steps.