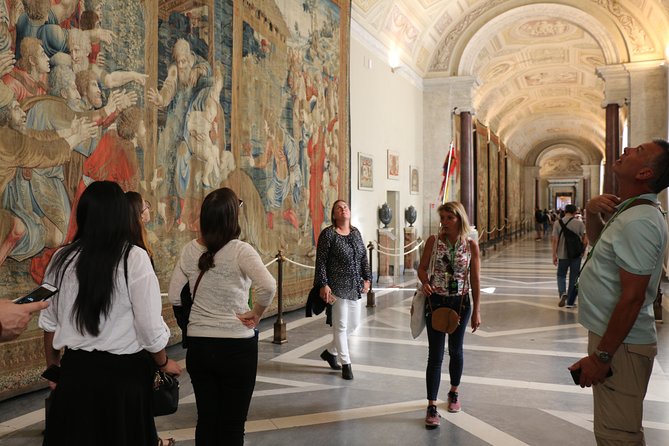 No need to wait in lines everywhere you go in The vatican city as here is the perfect 3-hour Early Access Vatican tour for those who wish to visit the Vatican as part of a friendly small group, away from the daily crowds. With your expert guide, you will enter the museums even before the opening to the public and get to visit the highlights of the Vatican museums and the Sistine Chapel before enjoying privileged, skip-the-line entrance to St Peter's Basilica.

Vatican city is jam-packed with an overwhelming number of mind-blowing works of art and your guide will ensure you don't miss any of the must-sees! Enjoy the luxury of being inside with a limited number of people, thanks to the special Early Access Vatican Tour.

You will visit the Vatican museums and Upper Galleries, including one of the Maps, Tapestries, and Candelabra. The galleries are connecting the north section of the Vatican palace with the Sistine chapel and the Basilica of St. Peters. The spectacular painted rooms have many Roman statues discovered during the excavations.

You will then go to Raphael Rooms that are part of the apartment of Pope Julius II. This is the place that houses the masterpiece 'The School of Athens'.

Borgia Rooms is the apartment that was painted by Pinturicchio and his school and it was commissioned by the Spanish Pope Alexander VI Borgia. It is inside the oldest section of the Apostolic palace where the main rooms of it preserve the artworks from modern and contemporary art.

Modern art and contemporary galleries were created thanks to the several donations in honor of Pope Paul VI from the United States and other countries. It is a great place for art lovers.

You will love Michelangelo's Sistine chapel, with the Frescoes painted in the 1500s for the Pope Julius II and Paul III, as it is the highlight of this Early Access Vatican Tour.

One of the largest churches in the world, The St. Peter's Basilica is the most renowned work of Renaissance architecture. Your professional guide will make sure that you are understanding all the aspects of this grand structure.

Tips for the Guide

Dress code is required to enter places of worship and selected museums. No shorts or sleeveless tops allowed. Knees and shoulders MUST be covered for both men and women. You may risk refused entry if you fail to comply with these dress requirements.

For booking with kids, kindly bring with you a copy of the ID or passport otherwise the kid tickets cannot be provided and the new ticket should be paid directly on site.

This group is up to 22 travelers or less.

Please note: if you arrive late you might not get an entry.

A current valid passport or ID document is required on the day of the tour for children under 18 years old as a proof of their age.

This tour/activity will have a maximum of 20 travelers.