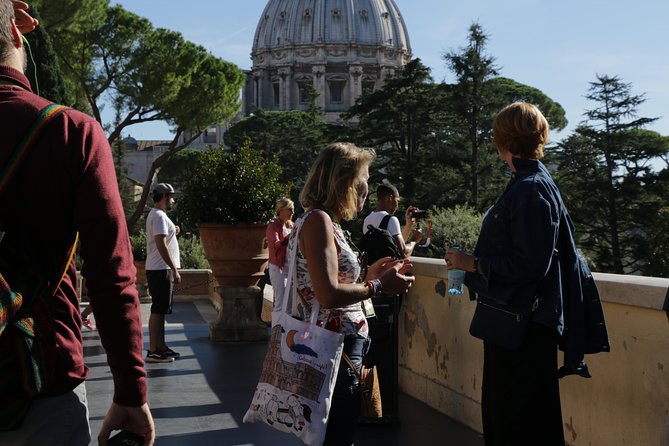 Enjoy anexclusive semi-private tour of the Vatican with early entrance, you will access 1 hour ahead of the e general opening. You will meet our team and passionate Vatican guide and right after you will be in the priority line ready to fast enter at 8:00 am. We aim to show you the Vatican museums and the Sistine Chapel before the daily crowd could enter. Our storytelling guide will point out the main art works of the galleries, guide you in the Raphael's Rooms & tells you stories hidden behind the art-works. You will access the Sistine chapel,discover Michelangelo's talent and find out in his frescoes several characters painted as a response for being criticized. Fast entrance to St Peter's Basilica to see Michelangelo's Pieta. Privileged entrance1 hour ahead of the general public, you will enjoy Vatican city in a much less crowded environment. Touring in a semi private group your experience will be personal & you will be able to interact to your guide. Personal headsets provided.

Michelangelo's Sistine Chapel with the Frescoes painted in the 1500s for the Pope Julius II and Paul III; Michelangelo painted first the ceiling with the Creation of the World and then the wall behind the altar with the Last Judgement.

Fast entry saving 30 minutes walking to the Basilica of St. Peter's where inside there is the "Pieta" by Michelangelo and the art works by Bernini

For booking with kids, kindly bring with you a copy of the ID or passport otherwise the kid tickets cannot be provided and the new ticket should be paid directly on site.

Please note: if you arrive late you might loose the entrance.