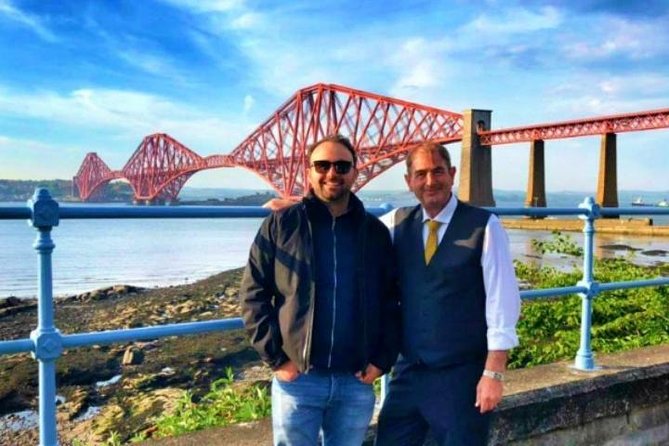 Your Edinburgh Private Day Excursion takes in the stunning capital of Scotland. Edinburgh is our hometown, and like a lot of locals we're proud of our city.

As your excursion is private you call the shots, enjoy the sights & attractions ofEdinburgh at your pace. You will take in all the major sights & attractions our capital has to offer, from our mighty castle and cobbled back streets to The Royal Palace along with stunning views from Holyrood Park and over the Forth of Firth we can cover all locations and as it is your day if there is something you want to see Aura will ensure it is added to your itinerary

With so many places to visit our tour allows you to visit the parts of Edinburgh you want to see, just remember this isYour Day, Your Way!

With Door to Door service from Edinburgh and customisable your day is planned in advance to ensure you visit the locations you want, the itinerary lists the possible locations and must be agreed prior to arrival.

Your Private Tour of Edinburgh is a Door to Door Service from any location within Edinburgh, it all starts with your chauffeur & vehicle introduction. Once the formalities are out of the way they will run through the itinerary for the day and ensure all the passengers are comfortable before setting off.
As this Tour is Private you can decide on the locations you wish to visit, below are some suggestions. Please confirm before arrival the locations you wish to visit so we can plan your itinerary, this can change as being a Private Tour you call the shots.
Edinburgh castle Mary Queen of Scots gave birth to James VI in the the castle and the tiny bed-closet still survives. In 1996 the Stone of Destiny, Scotlands coronation stone, was placed in the Crown Room alongside the nations Crown Jewels
The GrassmarketOne of the oldest parts of the city, and although the architecture has changed the layout retains the historic character of a bustling market place with many taverns and inns along with independent shops to walk around
The Royal MileExplore St Giles Cathedral and The Scottish Parliament building, stopping to visit Greyfriars Bobby
The Palace of HolyroodhouseThe official residence of the Queen in Scotland. The palace was home to Mary Queen of Scots for six years and houses beautiful tapestries and paintings
Holyrood ParkTake a drive through Holyrood park & around Arthurs Seat, the extinct volcano overlooking Edinburgh with some spectacular views
Edinburgh New TownExperience the elegance of 18th-century living, designed in 1791 by Robert Adam, Scotlands foremost 18th-century architect, Charlotte Square was one of the most fashionable and desirable residential addresses in Edinburgh
Royal Yacht Britanniawhere presidents, Kings and Queens were entertained. It was, first and foremost, the home from home of the Royal family when entertaining abroad
The Forth BridgesIconic and historic, Scotland's Forth Bridges are a wonder of the modern world. Towering side by side over the Forth, these structures represent the pinnacle of engineering from three centuries and offer a vacation photo to remember
Craigmillar CastleEdinburgh's other Castle used by Mary Queen of Scots as a safe haven after the birth of her son James the VI
Rosslyn chapel With connections to the Knights Templar and the Holy Grail and the Da Vinci Code
Your sightseeing tour finishes where you started, the Door to Door experience helps you enjoy the full tour without the worry of finding you way back at the end of the day.
There are many other attractions in and around Edinburgh, please message us and we will put together your Edinburgh Itinerary.

Services & Stories of a Scottish Driver