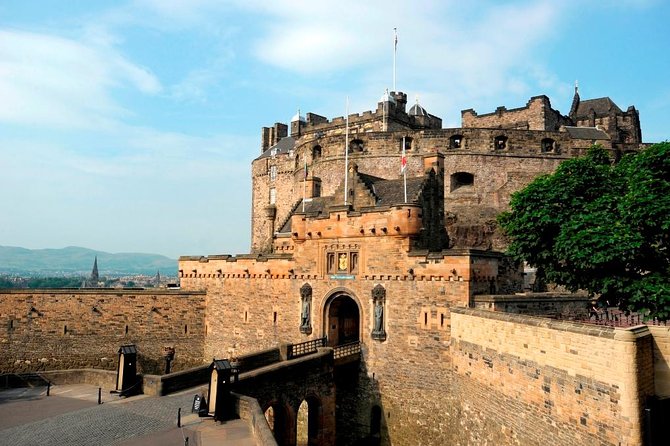 Soak in history, mystery and local flavor on this 2-hour walking tour of Edinburgh's Royal Mile and Edinburgh Castle. Follow your informative guide into Old Towns labyrinth of cobblestone alleyways and tenements - part of a UNESCO World Heritage site. Find secret places you would never discover on your own. As you pass St Giles Cathedral, Parliament Square and John Knox House, hear about Edinburghs colorful and turbulent past. Follow this great introduction to The royal mile with a tour of Edinburgh castle and learn how this iconic fortress shaped the country's history.

This walking tour lasting just over 2 hours takes you into Edinburgh's Old Town, which has retained much of its medieval street orientation and Reformation-era buildings. Together with New Town constructed in the 18th century, Old Town stands as part of a protected UNESCO World Heritage Site. Running through its center is the royal mile.

Meet your knowledgeable guide at Mercat cross on High Street, one of The royal mile's four 'sections'. At this central meeting place, townspeople and merchants once gathered to hear royal proclamations and pick up local gossip.

Follow your guide into Old Towns maze of cobblestone streets and concealed courtyards. Learn about the citys closes, cramped alleywaysl, and wynds, narrow lanes between houses.

Your venture down The royal mile includes a feast of entertaining stories from Edinburgh's past. Hear about the life of Deacon Brodie, town councilman by day, thief by night, which inspired Robert Louis Stevenson's novel The Strange Case of Dr. Jekyll and Mr. Hyde.

Take a look at the tightly clustered tenement buildings of Old Town, some reaching 14 stories. It is said people on the higher floors could reach out and shake hands with their neighbors in the opposite building, whereas people below kept their ears open for warnings of 'Gardyloo!' you will find out what this means.

Stop before the formidable St Giles Cathedral, formally known as the High Kirk of Edinburgh, the cradle of Scottish Reformation during the 16th century. As you gaze up at the crown steeple, listen to dramatic historical tales involving Protestant Reformers, brave Covenanters and the fiery Jenny Geddes who threw her chair at a bishop, an act that supposedly started a riot that led to war.

In Parliament Square, stand before the House built in 1641 and hear about the Great Fire of 1824. Admire the 15th-century craftsmanship of John Knox House while learning of its role in the turbulent abdication of Mary, Queen of Scots.

From Lawnmarket, the oldest part of Old Town, walk up Castlehill to the ceremonial parade ground called the Esplanade, which boasts commanding views of the city.

Then, enter Scotland's most famous historic attraction: Edinburgh castle. This castle has witnessed a number of bloody battles, including the War of Independence between the Scots and English in the 14th Century. Learn about its remarkable history on a 45-minute guided tour of the grounds.

After the tour concludes, you can move through the rooms and see wonders like the Honours of Scotland, the oldest crown jewels in the United Kingdom, and the Stone of Destiny, the coronation seat of ancient kings. You can also visit St Margarets Chapel, Edinburgh's oldest building, and its military museums.

Please note: Edinburgh Castle will not admit visitors with bags larger than a 25litre capacity