Three Islands Cruise With Lunch By Galleon Tirena From Dubrovnik 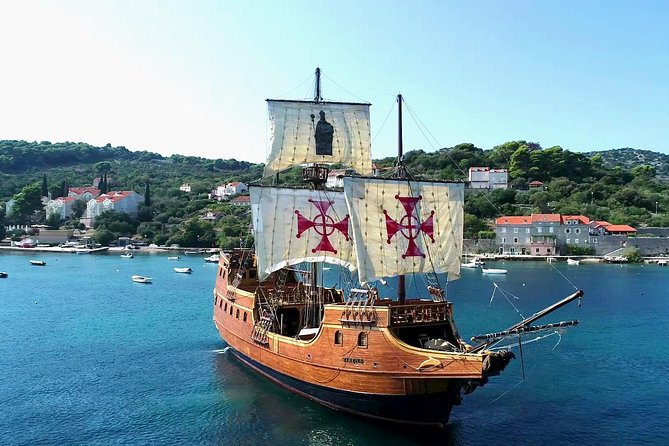 Spend a day cruising around Croatia's pretty Elafiti islands aboard a replica of a historical galleon. Sail from Dubrovnik around the sun-baked archipelago and enjoy free time to explore the islands of Koloep, Lopud and ipan. A traditional Croatian lunch with live folk music is also included!

Explore the beautiful islands off the coast of Croatia by sailboat a replica of a historical galleon and experience breathtaking views of the Dubrovnik region. During this cruise, you will visit the three most beautiful islands of the Elafiti archipelago: Koloep, Lopud and ipan. The legend of the Elafiti islands is hidden in its name; it derives from the Ancient Greek word for deer an animal that the Greeks used to hunt on the islands.

After docking at each island, enjoy free time to explore and discover lush gardens, orchards of oranges and lemons, and rugged coastal scenery. Walk around the charming island villages and soak up the sights, seeing old manor houses overlooking the quaint fishing villages and churches near the seafront.

Halfway through your sailing adventure, while your boat is docked at ipan's pier, sit down to a delectable lunch of grilled fish, accompanied with wine. As you eat, soak up the island views and listen to live traditional music, performed by onboard musicians. At the end of your day, return to Dubrovnik Port and finish your experience with a hotel drop-off.

You are required to specify the name of your hotel and contact telephone number during your stay in Dubrovnik. This is important information the tour operator requires in case you need to be contacted regarding changes to your start time