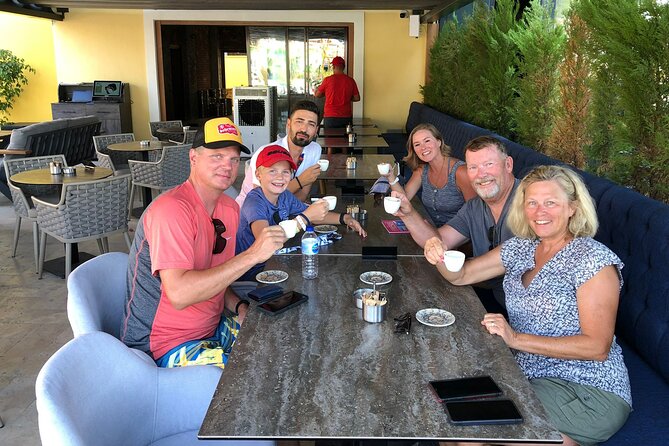 Catch the highlights of Ephesus, including the UNESCO World Heritage Site, on this 5-hour semi-private trip from Kusadasi. Experience the best Ephesus has to offer on this comprehensive full day private guided tour. This Kusadasi shore excursion takes you to the most noteworthy and popular destinations available. Learn about Ephesus's stunning history, visit incredible landmarks, and enjoy local cuisine before going back to your cruise ship or hotel. This Kusadasi guided tour is ideal for history lovers, photographers, and anyone looking for an immersive cultural experience at a affordable price.

This tour is guaranteed Skip-The-Line with pre-purchased tickets.
This tour's maximum participant number is 10 person per group.

Your guides will meet you at the Kusadasi Cruise Port and bring you to OKSA Port, meeting and starting point of the tour. You will start your day with a delicious complimentary Coffee and Turkish Delights.

It's up to you when you leave your hotel or cruise ship for your 5-hour private tour: start at any time between 7:30am and 2pm. The order of the itinerary is flexible, but typically starts with the UNESCO-listed ruined city of Ephesus, about 25 minutes drive from Kusadasi.

Discover one of the world's most atmospheric Greco-Roman cities under the eye of your private guide. Visit the market place, the baths, the theater, the odeon, and the fountains of Trajan and Pollio. Stroll Harbor Street, Marble Street, and Curetes Street, and walk through the Gate of Mazeus and Mithridates. Admire the Library of Celsus, the Prytaneion where the sacred flame was stored, and the temples of Hadrian and Domitian. You'll also see the shockingly public latrines where ancient Romans went about their business!

Your next stop is usually the Meryemana (Virgin Mary's House), a site that's sacred to both Christians and Muslims, where some believe Jesus' mother spent her last days. After this, you might wish to break for lunch, which is followed by a cultural demonstration, or complete the tour and have lunch at the end.

Next, and still very close to Ephesus, is the Temple of Artemis. This was once one of the Seven Wonders of the Ancient World, but only a single column marks the site today.

Finally, discover the legend of the Seven Sleepers, another story that's common to Christianity and Islam. Learn how seven young men fled persecution during Roman times and sought refuge in this cave, emerging only after many lifetimes has passed.

Once your tour is complete, your driver and guide will drop you back at the port or your hotel.

Pickup and Drop-off from Hotel and Cruise Port

Entrance fees (per person aprox.25USD), Payable at the end of tour.

A Delicious Local Lunch (10$ per person)

Entry/Admission - The Basilica of Saint John