Ephesus And House Of Virgin Mary Day Trip From Kusadasi

Ephesus And House Of Virgin Mary Day Trip From Kusadasi 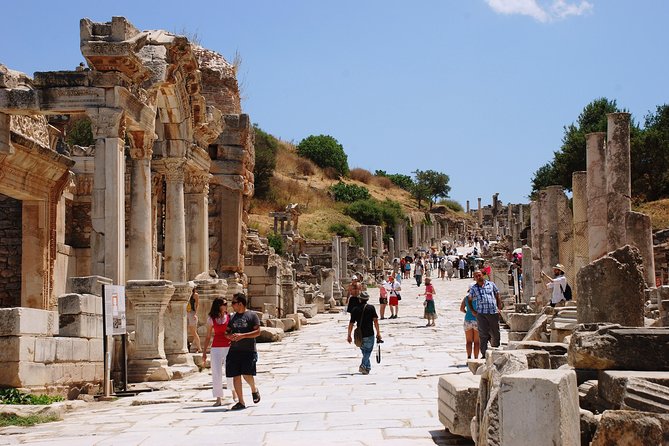 Explore the UNESCO World Heritage Site of ancient Ephesus and see the House of the Virgin Mary (Meryemana) on this 6-hour day trip from Kusadasi. Marvel at the ruins of this fantastically preserved Roman city, before visiting the chapel built on the spot where some believe Jesus' mother spent her last days. Tour includes lunch, and entrance fees.

Expect pickup from your hotel inKusadasiby 9:30am.The tour is operated by a comfortable minibus and accompanied by a local english speaking guide.

Ittakes about half an hour to drive to the ancient city of Ephesus, a UNESCO World Heritage Site that's one of the best-preserved Roman cities still extant. You'll soon appreciate this as you stroll its marble-paved streets and admire mosaics and frescoes.

During antiquity, Ephesus was one of the largest Roman cities in Asia, a commercial, religious, and social center due to its bustling harbor. Your guide will show you the Temple of Hadrian, the ancient baths, and a building many believe was the city's brothel: don't miss the Library of Celsus, the most impressive of the structures in Ephesus.

You'll visit the theater, which once held around 25,000 citizens, who gathered to watch theatrical performances and gladiator battles. Today, the site offers impressive views across the main street with its marble fountains, temples, and baths.

Enjoy lunch at Ephesus before the short drive to the House of the Virgin Mary (Meryemana) on Mount Coressos. This tiny chapel is built atop the foundations of a ruined house where some Christians and Muslims believe the Virgin Mary spent her last days.

Your last visit will be Sirince village which is famous throughout Turkey for its fruit wines. There you can taste and buy any kind of fruit wine (cherry, melon, pomegranate, strawberry, etc.). Then drive back to Kusadasi and enjoy the rest of your day.

The duration of transfers are approximate: the exact duration will depend on the time of day and traffic conditions